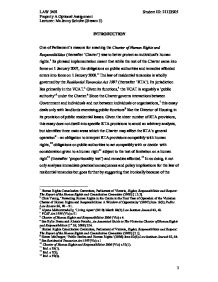 INTRODUCTION One of Parliament's reasons for enacting the Charter of Human Rights and Responsibilities (thereafter 'Charter') was to better protect an individual's human rights.1 Its phrased implementation meant that while the rest of the Charter came into force on 1 January 2007, the obligations on public authorities and remedies afforded enters into force on 1 January 2008.2 The law of residential tenancies is wholly governed by the Residential Tenancies Act 1997 (thereafter 'RTA'). Its jurisdiction lies primarily in the VCAT.3 Given its functions,4 the VCAT is arguably a 'public authority'5 under the Charter.6 Since the Charter governs interactions between Government and individuals and not between individuals or organisations,7 this essay deals only with landlords exercising public functions8 like the Director of Housing in its provision of public residential leases. Given the sheer number of RTA provisions, this essay does not dwell into specific RTA provisions to avoid an arbitrary analysis, but identifies three main areas which the Charter may affect the RTA's general operation9 - an obligation to interpret RTA provisions compatibly with human rights,10 obligations on public authorities to act compatibly with or decide with consideration given to a human right11 subject to the test of limitation on a human right12 (thereafter 'proportionality test') and remedies afforded.13 In so doing, it not only analyses immediate practical consequences and policy implications for the law of residential tenancies but goes further by suggesting that ironically because of the Charter, these immediate effects may either dissipate or lead to practical problems over time. INTERPRETATIVE OBLIGATION [s 32(1)] South suggests that the Charter14 does not allow for the purpose of any legislation to be altered.15 He argues that since the statutory interpretation is a manifestation of its purpose, because the Charter expressly provides for a 'declaration of inconsistent interpretation'16 (thereafter 'Declaration') with human rights, it accounted for those purposes which are inconsistent with human rights and hence cannot have 'impliedly amended all earlier Victorian laws to include the purpose of protecting human rights'.17 This means that ...read more.

While there is no obligation on public authorities to provide tenancy under the Charter,41 if they deny individuals tenancy in contravention of a human right under the Charter,42 they will be acting unlawfully under s 38(1).43 Since the wide range of human rights protected under the Charter makes it difficult to deny an individual tenancy, the combined effect of s 38(1) and s 7(2) may unwittingly burden public authorities with the responsibility of providing sufficient residential tenancies over time. Arguably, this brings the scope of the RTA closer to that of the Housing Act 1983.44 RELIEF [s 33(1) & s 36(1)] AND REMEDIES [s 39(1)] Some argue that although the Charter's interpretative obligation and the obligation on public authorities have far-reaching effects on the RTA, the reliefs and remedies offered by the Charter are limited. As aforementioned, the relief for an inconsistent interpretation is a Declaration that neither affects the validity of the provision45 nor gives rise to any cause of action46 despite allowing for possible amendments to the RTA. Yet regardless of whether the RTA is amended, the mechanisms triggered by a Declaration not only keep its provisions under constant Parliamentary review, it indirectly keeps both Parliament and the RTA abreast the current tenancy situation in Victoria. Ironically, the ambiguous s 39(1) has the greatest effect on the RTA in terms of the remedies it affords. '(U)nlawfulness' in s 39(1) refers to any 'unlawfulness' arising under s 38(1).47 While a literal reading of s 39(1) suggests that no remedies will be available for breach of s 38(1) unless there exists a non-Charter action for remedies, Gans argues that s 39(1) confers a freestanding cause of action for one to seek remedies should a public authority's particular conduct breach s 38(1) so long as the remedy is available when that particular conduct is considered unlawful under the non-Charter legislation. The public authority's conduct need not be unlawful under the non-Charter legislation, nor need there be a non-Charter action before remedies may be sought for breach of s 38(1).48 This latter interpretation of s 39(1) ...read more.