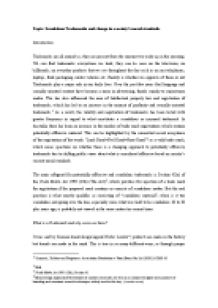 Scandalous trademarks. In Australia there has been an increase in the number of trade mark registrations which contain potentially offensive material.

﻿Topic: Scandalous Trademarks and change in a society?s moral standards Introduction: Trademarks are all around us, they are present from the moment we wake up in the morning. We can find trademarks everywhere we look; they can be seen on the television, on billboards, on everyday products that we see throughout the day such as on our telephones, laptops, food packaging, motor vehicles etc. Reality is whether we approve of them or not Trademarks play a major role in our daily lives. Over the past few years foul language and sexually oriented content have become a norm in advertising, thanks mainly to mainstream media. This has also influenced the area of Intellectual property law and registration of trademarks; which has led to an increase in the amount of profanity and sexually oriented trademarks.[1] As a result, the validity and registration of trademarks has been tested with greater frequency in regard to what constitutes a scandalous or immoral trademark. In Australia there has been an increase in the number of trade mark registrations which contain potentially offensive material. This can be highlighted by the somewhat recent acceptance of the registration of the words "Look Good+Feel Good=Root Good"[2] as a valid trade mark, which raises questions on whether there is a changing approach to potentially offensive trademarks due to shifting public views about what is considered offensive based on society?s current moral standards. The main safeguard for potentially offensive and scandalous trademarks is Section 42(a) ...read more.

or a delegate will determine whether or not to accept or reject the application.[13] The most common grounds for rejection of a trademark can be found in Division 2 section 39-44 of the Act.[14] For the purposes of this paper I will focus on Section 42(a) of the Act[15]; which provides for rejection of a trade mark for registration if the proposed mark contains or consists of scandalous matter. Under the Act there is no clear definition of what exactly constitutes as being "scandalous"; although according to The Trademarks office Manual of Practice and Procedure Part 30 Section 2.1[16] Scandalous is taken to mean the following: 1. disgraceful to reputation; shameful or shocking. 2. offensive to public or individual sense of propriety or morality: exciting reprobation. 3. Defamatory or libellous, as a speech or writing. In practice and judging from the examples of trademarks that have been able to get approved, it is quite rare for a mark to be rejected on the grounds that it is scandalous.[17] Further as will be shown; merely being ?crude? and ?distasteful? will not qualify for rejection for being scandalous. There are relatively few decisions of the Trade Marks Office and the Australian Courts in relation to the interpretation of section 42(a). But in the case of Cosmetic, Toiletry and Fragrances Association Foundation v Fanni Barns Pty Ltd[18], the Trade Marks Office had to consider whether the trade mark "Look Good+Feel Good=Root Good", which was related to products in the area of cosmetics and sexual hygiene products and clothing, was scandalous. ...read more.

It is appropriate to consider normal, expected usage rather than possible usage. For example, in relation to an application for ?t-shirts? it would not be appropriate to consider how a mark would be received when worn in church during a solemn religious occasion as this would not constitute normal expected usage for such goods.[26] This was the position taken in the ?NUCKIN FUTS? application as it was stated that the trademark was approved only on the condition that it would not be marketed towards children and was only to be sold in bars and nightclubs and not exposed to the general public. Conclusion: As shown above, it is safe to say that in our society not only in Australia but all over the world, people have become more open and have come to accept/ tolerate certain things which may have not been tolerated by our elders. That?s not to say that our morals and values have diminished. It is merely a sign of time; in my experience I can say that certain vulgar words such as ?Shit?, ?Sucker", Fucker do not have the impact as they once did. They do not cause that same shock and disgust as they did maybe 20 years ago. I believe that the law as well as legislation which includes the area of trademark application is supposed to progress along with the society, it should not change radically, but it should be able to progress and adjust to modern times instead of being stagnant and out dated. ...read more.