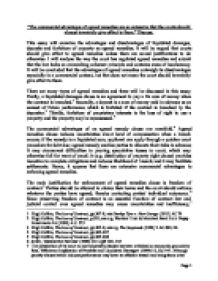 The commercial advantages of agreed remedies are so extensive that the courts should almost invariably give effect to them. Discuss.

"The commercial advantages of agreed remedies are so extensive that the courts should almost invariably give effect to them." Discuss. This essay will examine the advantages and disadvantages of liquidated damages, deposits and forfeiture of property as agreed remedies. It will be argued that courts should give effect to agreed remedies unless there are sound justifications to do otherwise. I will analyse the way the court has regulated agreed remedies and submit that the law lacks an overarching coherent principle and contains areas of incoherency. It will be concluded that the advantages of agreed remedies outweigh its disadvantages especially in a commercial context, but that does not mean the court should invariably give effect to them. There are many types of agreed remedies and three will be discussed in this essay. Firstly, a liquidated damages clause is an agreement to pay a fix sum of money when the contract is breached.1 Secondly, a deposit is a sum of money paid in advance as an earnest of future performance which is forfeited if the contract is breached by the depositor.2 Thirdly, forfeiture of proprietary interests is the loss of right to use a property and the property may be repossessed.3 The commercial advantages of an agreed remedy clause are manifold.4 Agreed remedies clause reduces uncertainties about level of compensation when a breach occurs; if the remedy is a liquidated sum, applicant can apply through a quicker court procedure for debt due; agreed remedy enables parties to allocate their risks in advance; it may circumvent difficulties in proving speculative losses in court, which may otherwise fail for want of proof; it (e.g. ...read more.

Firstly, fairness is not the standard which the courts employ. Because deposit only has to be set at a reasonable rate with reference to customs of trade, the amount of justifiable deposit may be unrelated to the actual loss suffered by the injured party.19 Therefore, it seems the at the court is concerned with commercial reasonableness rather than fairness. Secondly, fairness is a vague concept which does not explain how the court decided to use the reasonable test. For example, the court could have tested deposits according to the actual loss suffered and still claimed the standard to be based on consideration of fairness. No justification is provided by the courts as to the difference in standards for testing deposits and penalty clauses. A possible explanation may be that courts have developed responsively to different types of agreed remedies in an ad hoc manner and consequently, there are no overarching coherent principles or uniformity of standards for testing the fairness of deposits and penalty clauses. In relation to forfeiture of property, it is also regulated and courts may grant a relief from forfeiture so that property is not repossessed. Relief would normally be granted if the rights confer a proprietary interest; proprietary interest is added to contract as security for performance; and time is not of the essence.20 The main problem with granting a relief is it only applies to certain proprietary or possessory interest.21 In Sport International22, relief was not granted for a contractual licence for use of trademark; Whereas in BICC,23 relief was grant for joint proprietary interests in patent rights. ...read more.

the loss suffered whenever the amount contracted is more than the actual loss suffered, instead of invalidating clauses for not being a genuine pre-estimate. Compare civil law approaches which seem to accord more closely with the concept of corrective justice. 17 See Beckham v Drake 9 E.R. 1213 where the court invalidated the penalty clause and awarding ordinary damages with accurate assessment of fair measure of compensation for loss. 18 Workers Trust & Merchant Bank Ltd v Dojap Investments Ltd [1993] A.C. 573 19 See e.g. Union Eagle Ltd. v. Golden Achievements Ltd. [1997] 2 All ER 215 or Hyundai Shipbuilding and Heavy Industries Ltd. v. Papadopoulos [1980] 1 WLR 1129 20 See Dillon LJ in BICC plc v Burndy Corp [1985] Ch 232, CA; see also On Demand Information plc v Michael Gerson (Finance) plc [2002] UKHL 13 21 The Scaptrade [1983] 2 AC 694, HL, where the court concluded that a contract for services does not qualify for relief from forfeiture. 22 Sport International Bussum v. Inter-Footwear Ltd [1984] 1 WLR 776 23 BICC plc v Burndy Corp [1985] Ch 232, CA 24 Hugh Collins, The Law of Contract, p.387 25 Smith, 'Relief Against Forfeiture: A Restatement' [2001] CL 178, p. 194; See for example, in Sport International, the business was ruined because of a delay in arranging a bank guarantee, but the payment for using the trademark was still satisfied and the plaintiff was not affected. 26 Smith, 'Relief Against Forfeiture: A Restatement' [2001] CL 178, p.186 27 Hugh Collins, The Law of Contract, pp.387-8 ?? ?? ?? ?? Page 1 ...read more.