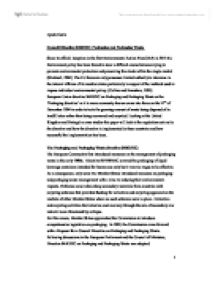 Lynda Curtis Council Directive 94/62/EC: Packaging and Packaging Waste Since its official inception in the first Environmental Action Plan (EAP) in 1973 EU Environment policy has been forced to steer a difficult course between trying to promote environmental protection and preserving free trade within the single market (Blacksell, 1994). The EU however only possesses limited authority to intervene in the internal affaires of its member states particularly in respect of the methods used to impose individual environmental policy. (Collins and Earnshaw, 1993) European Union directive 94/62/EC on Packaging and Packaging Waste or the 'Packaging directive' as it is more commonly known came into force on the 31st of December 1994 in order to tacle the growing amount of waste being disposed of in landfill sites rather than being recovered and recycled. Looking at the United Kingdom and Portugal as case studies this paper will look at the regulations set out in the directive and how the directive is implemented in these countries and how successful the implementation has been. The Packaging and Packaging Waste directive (94/62/EC) The European Community first introduced measures on the management of packaging waste in the early 1980s. ...read more.

The UK encourages complying with the the directives obligations for specific recovery and recycling through the Producer Responsibility Obligations (the packaging waste regulations.) The current UK complience system works by demanding that companies with a threshold of a �2 million turnover, and handling more than 50 tonnes of packaging a year contribute a certain proportion of the UK's obligatory recycling. Businesses below this threshold do not have obligatory contributions. Different proportions of obligation are expected at different levels of the supply chain from manufacturer to seller. Companies in the UK who import pre-packaged goods are expected to pay 100% of the obligation. Further implementation of the packaging directive is achieved through the Environment Agency (England and Wales), SEPA (Scotland) or EHS (Northern Ireland.) These agencies offer assistance to companies in order to reach the set targets and adhere to regulations. There are currently 17 Agency registered complience schemes in the UK which operate in a competative market and which, between them have attracted 85% of producers. Should the companies choose to work individually they are required to provide evidence that they have complied with the regulations from an accredited reprocessor or exporter. ...read more.

Despite their similarities there is one large difference in the implementarion of the packaging directive in the UK and Portugal in that the directive is not yet imposed as law in Portugal due to the extemded time limits given to Portugal, Greece and Ireland. Once this time has lapsed and the directive is imposed in Portugal, there may be a huge leap forward in the attainment of EU targets in Portugal. No later than 31 December 2007, the European Parliament and the Council, acting on a proposal from the Commission, will fix targets for 2009--20144 showing long term commitments to reducing waste and increasing recycling. Reference list Bailey, I.G. (1999) 'Flexibility, Harmonization and the Single Market in EU Environmental Policy,' Journal of Common Market Studies, 37 (4), pp. 549-71. Blacksell, Mark and Allan Williams, eds. 1994. The European Challenge: Geography and Development in the European Community. New York: Oxford. COLLINS K, EARNSHAW D (1993). The implementation and enforcement of European Community Environment legislation A green dimension for the European Community Political Issues and Processes http://dti.gov.uk/sustainability/packaging.htm Accessed 22/11/2005 http://europa.eu.int/scadplus/leg/en/lvb/l21207.htm Accessed 05/12/05 Intraplas Plastic Forums http://www.intraplas.pt/en/empresa/ambiente.asp Accessed 05/12/05 http://petcore.org/euro_naleg_02.html#portugal Accessed 05/12/05 1 http://www.dti.gov.uk/sustainability/packaging.htm Accessed 22/11/2005 2 http://europa.eu.int/scadplus/leg/en/lvb/l21207.htm Accessed 05/12/05 3 http://www.petcore.org/euro_naleg_02.html#portugal Accessed 05/12/05 4 http://europa.eu.int/scadplus/leg/en/lvb/l21207.htm ?? ?? ?? ?? 1 ...read more.