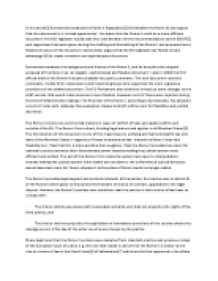 What does Dr. Symeonides mean when he characterises Rome II as a missed opportunity? Would it be fairer to see the Regulation as an essential step forward in the process of European harmonisation of conflict rules? Support your answer with practical examples.

﻿In his article[1] Symeonides analyses the Rome II Regulation[2] (hereinafter the Rome II) and argues that this document is a ?missed opportunity?. He states that the Rome II could be a more efficient document if the EU legislator would take into consideration all the recommendations by the GEDIP[3] and rapporteur that were given during the drafting and formatting of the Rome II and proposed more flexible structure of the document. Symeonides argues that the EU legislator has ?failed to take advantage?[4] to create a modern and sophisticated document. Symeonides analyses the background and history of the Rome II, and he describes the original proposal of the Rome II as ?an elegant, sophisticated and flexible document?. Later in 2002 the first official draft of the Rome II became available for public comments. The new document received comments, mostly from corporations and industrial groups who supported the most regressive provisions of the drafted document. ...read more.

The aim of the Rome II is to make the system less open to interpretation thereby making the judicial system more stable and consistent, the uniformity of judicial decisions would leave less room for ‘forum shoppers’ as the place of forum would no longer matter. The Rome II provides legal support and protects interests of the parties, this can be seen in article 14 of the Rome II which gives to the parties the freedom of choice of contract, applicable to the legal dispute. However the Rome II provides two conditions that the parties in their choice of law have to comply with: · The choice shall be expressed with reasonable certainty and shall not prejudice the rights of the third parties; and · The choice shall not prejudice the application of mandatory provisions of the country where the damage occurs, if the law of the other country was chosen by the parties. ...read more.

Finally in regards to jurisdiction, recognition and enforceability of judicial decisions in Private International law, the Rome II is fully synchronised with the Brussels I and Rome I Regulations and aims to achieve same goals of harmonising EU Private International law. [1] Symeon Symeonides, ‘Rome II and Tort Conflicts: A Missed Opportunity’ [2008] 56 American Journal of Comparative Law < http://papers.ssrn.com/sol3/papers.cfm?abstract_id=1031803#> accessed 13 March 2013 [2] Regulation (EC) â864/2007 on the Law Applicable to non-contractual obligations [3] Groupe europeen de droit international prive [4] Symeon Symeonides supra 1, page 3 [5] According to Recital 40 of the Rime II, Denmark did not accept the Regulations and applies the Rome Convention 1968. [6] Case C68/93 Shevill v Presse Alliance SA [1995] ECR I-415 [7] The scope of the Rome II Regulation does not cover the cases arising from defamation, however the Rome I has adopted the general approach that was established by the judgements on these cases. [8] eDate Advertising GmbH v X (C-509/09) and Martinez v MGN Ltd (C-161/10) [2012] EMLR 12 ...read more.