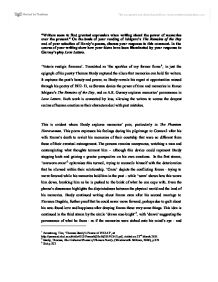 Writers seem to find greatest expression when writing about the power of memories over the present. On the basis of your reading of Ishiguros The Remains of the Day and of your selection of Hardys poem

"Writers seem to find greatest expression when writing about the power of memories over the present." On the basis of your reading of Ishiguro's The Remains of the Day and of your selection of Hardy's poems, discuss your response to this comment. In the course of your writing show how your ideas have been illuminated by your response to Gurney's play Love Letters. 'Veteris vestigia flammae'. Translated as 'the sparkles of my former flame'1, in just the epigraph of his poetry Thomas Hardy captured the allure that memories can hold for writers. It captures the past's beauty and power, as Hardy reveals his regret at opportunities missed through his poetry of 1912-13, as Stevens denies the power of time and memories in Kazuo Ishiguro's The Remains of the Day, and as A.R. Gurney explores memories' permanence in Love Letters. Each work is connected by loss, allowing the writers to access the deepest realms of human emotion as their characters deal with past mistakes. This is evident where Hardy explores memories' pain, particularly in The Phantom Horsewoman. This poem expresses his feelings during his pilgrimage to Cornwall after his wife Emma's death to revisit his memories of their courtship that were so different from those of their eventual estrangement. The persona remains anonymous, watching a man and contemplating what thoughts torment him - although this device could represent Hardy stepping back and gaining a greater perspective on his own emotions. In the first stanza, 'careworn craze'2 epitomises this turmoil, trying to reconcile himself with the deterioration that he allowed within their relationship. 'Craze' depicts the conflicting forces - trying to move forward while his memories hold him in the past - while 'worn' shows how this wears him down, breaking him as he is pushed to the brink of what he can cope with. ...read more.

Hardy claims that he 'shall traverse old love's domain never again'19 with 'traverse' suggesting the hardship that he has endured - reinforced by the adjective 'old', highlighting his feelings of experience - and 'domain' creating the sense of power that love held over him. His memories of the past created his future for him with a finality that is even apparent in the poem's rhyme scheme as each stanza's final two lines rhyme, giving the work a feeling of an ending or conclusion. This is typical of naturalism, of which Hardy's work is a part, which is known for its pessimistic views of life and for its arguments about the influences of fate and free will. Here Hardy appears to be making his own decision; yet, it could be argued that he made this choice due to his past experiences, suggesting the importance of environmental factors that naturalist writers emphasised. In contrast, some writers see memories' power as cause for their characters to create a distance between themselves and their past. James Procter wrote that Ishiguro's writing focuses on how memories 'haunt the present'20; however, it could be argued that his writing instead focuses on his characters avoidance of the memories that haunt them, hiding behind their created persona or account of events. In The Remains of the Day this is shown through Stevens' use of Standard English, and by implication Received Pronunciation, throughout his narrative, using no colloquial terms although he appears to write for himself rather than a reader. This suggests a persona that he has made for himself as he cannot escape his butler fa�ade even when expressing memories that hold some of his most powerful emotions. ...read more.

Instead, he faces what 'remains of [his] day'34, with 'day' symbolising his life which he must continue alone. The noun 'remains' adds a sense of poignancy to the metaphor with its suggestions of wastage. Through his actions he has been left by the wayside, living out what is left of a life that was lost to him as he followed what he now knows to be misguided notions. This impact of the past on the present would have held a particular resonance for readers at the time of the novel's publication as this was just two years after the end of the Cold War which had been ongoing since 1945. The public had seen first-hand how past actions can resonate for decades afterwards so would have understood Stevens' situation, torturing himself for the end that came of such 'small incidents'. In conclusion, it appears that it is through the power of memories over the present that writers find their greatest expression. For Hardy, this expression is an attempt to fill the void in his life, expressing the emotion that he regrets having held back from before Emma's death. In Gurney's play, it is the characters who are the writers with their relationship providing the material for letters which grant the memories a permanence and power over their lives. Yet, for Ishiguro it is Stevens' lack of expression that helps him to find his greatest expression. It is what Stevens does not tell the reader that tells them the most about him, with his denial allowing them an unparalleled view of his troubled mind. It is the absolute intensity of the pain and loss that each of these characters faces that truly allows their readers to see them, and to experience with them the control that the past has gained over their lives. ...read more.