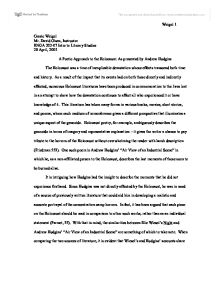 A Poetic Approach to the Holocaust: As presented by Andrew Hudgins

Cassie Weigel Mr. David Olsen, Instructor ENGA 202-07 Intro to Literary Studies 28 April, 2005 A Poetic Approach to the Holocaust: As presented by Andrew Hudgins The Holocaust was a time of inexplicable devastation whose effects transcend both time and history. As a result of the impact that its events had on both those directly and indirectly affected, numerous Holocaust literatures have been produced in commemoration to the lives lost in an attempt to show how the devastation continues to affect all who experienced it or have knowledge of it. This literature has taken many forms in various books, movies, short stories, and poems, where each medium of remembrance gives a different perspective that illuminates a unique aspect of the genocide. Holocaust poetry, for example, ambiguously describes the genocide in terms of imagery and representative explanation - it gives the writer a chance to pay tribute to the horrors of the Holocaust without overwhelming the reader with harsh description (Friedman 553). One such poem is Andrew Hudgins' "Air View of an Industrial Scene" in which he, as a non-affiliated person to the Holocaust, describes the last moments of those soon to be burned alive. It is intriguing how Hudgins had the insight to describe the moments that he did not experience firsthand. Since Hudgins was not directly affected by the Holocaust, he was in need of a source of previously written literature that could aid him in developing a realistic and accurate portrayal of the concentration camp horrors. ...read more.

There are many possible approaches to this, but Hudgins' way of utilizing the respectful silence was through his "wordless" description of unloading the people, as opposed to verbalizing it the way that Wiesel did. After the Jews were unloaded and began to move "toward the gate," Hudgins introduced a reoccurring "shadow" that eventually produced "smoke black as just plowed earth." The word choice of Hudgins at this point is extremely critical because throughout all types of Holocaust literature, the genocide is often referred to as "the shadow of the Holocaust" to illustrate how the traumatic events affected both those directly and indirectly involved in a way that cast a "shadow" over their lives (Moses, 37). The word "shadow" also serves as the physical shadow that was cast over the concentration camps that the black smoke created. One of the more popular ways of the Germans extinguishing the Jews was through what Wiesel described as the "crematory (35)," where they burned the Jews alive. In the procession toward the flames, Wiesel is blunt in how he describes how he was "gradually drawing closer to the ditch" and all the while counting his steps and bidding "farewell to [his] father, to the whole universe (Wiesel 31)." He saw his life slowly being taken away from him and everyone around him was crying and praying to their Lord to spare them of the tumultuous death. ...read more.

The way in which Hudgins does this serves as an advantage to his credibility as a poet who was writing from a removed viewpoint because he added the unique twist of bringing in the reader and him as "watchers" who can only ruminate about the agony endured by the victims. As a poet, Hudgins took a large risk in writing Holocaust poetry because in order to do so he had to subtract something from the crude reality for the sake of heightened effect (Lang 23). Instead of writing bluntly as Elie Wiesel did from a survivor viewpoint, he had to use imagery to illustrate the concentration camp with the use of shadows, gardens, and tomatoes. Therefore, it can be difficult to read this poetry and even more difficult to judge it by ordinary literary criteria (Friedman 550). However, when this poem is read for concise understanding, the reader can truly begin to see the intent and success of Hudgins' portrayal. He may have taken a risk in writing it, but ultimately created a moving poem that clearly adheres to the "unwritten rules" of Holocaust poetry while at the same time contains a unique use of poetic license. "Air View of an Industrial Scene" takes Holocaust literature like Elie Wiesel's Night and turns it into an account of the "events beyond the imagination's power to conceive, horrors unprecedented in history, horrors beyond the power of language to articulate (Freidman 547). ...read more.