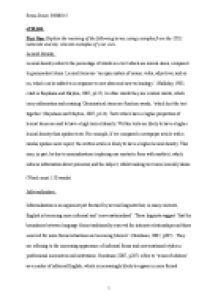 Baynham and Maybin (2007, p123) assert that ...electronic means of communication seem to have shifted the relationship between speech and writing. Discuss this statement, using brief examples of your own to illustrate your points.

﻿Emma Denny. B3300145. eTMA04. Part One: Explain the meaning of the following terms, using examples from the U211 materials and any relevant examples of your own. Lexical Density: Lexical density refers to the percentage of words in a text which are lexical items, compared to grammatical items. Lexical items are ?an open system of nouns, verbs, adjectives, and so on, which can be added to in response to new ideas and new technology.? (Halliday, 1985, cited in Baynham and Maybin, 2007, p125). In other words they are content words, which carry information and meaning. Grammatical items are function words, ?which knit the text together? (Baynham and Maybin, 2007, p124). Texts which have a higher proportion of lexical items are said to have a high lexical density. Written texts are likely to have a higher lexical density than spoken texts. For example, if we compared a newspaper article with a similar spoken news report, the written article is likely to have a higher lexical density. This may, in part, be due to nominalisation (replacing one syntactic form with another), which reduces information about processes and the subject, whilst making text more lexically dense. (Word count: 150 words) Informalisation: Informalisation is an argument put forward by several linguists that, in many contexts, English is becoming more informal and ?conversationalised?. ...read more.

Warschauer (2002, cited in Baynham and Maybin, 2007, p131) also mentions chat room communication which, similar to instant messaging, often takes the form of a ?written conversation?. Studies such as Merchant?s 2001 study of teenage girls? use of chat rooms (cited in Baynham and Maybin, 2007, pp127-128) have found many features of spoken language in this type of communication. Features such as non-standard grammar and pronunciation, exophoric ellipsis and one word utterances are common, with non-verbal responses and mood signified with emoticons, capital letters, exclamation marks and stretching of words. Perhaps this is the clearest example of speech crossing the boundary in to writing, through electronic means of communication. These particular types of communication are often associated with the youth of society. Texting is also associated with youth, despite many adults using this type of communication. Perhaps it is the language use or ?text speak? which is what we tend to associate with youth. There have been claims that ?text speak? has been crossing boundaries in to writing, in schools and even appearing in exam answers. The Daily Mail (Mail Online, 2006) reported that exam chiefs had admitted ?that English answers written in text message language would be acceptable as long as they were correct.? This followed a few instances of ?text speak? appearing in student?s answers, and evoked a lot of debate about whether text speak was affecting literacy. ...read more.

It is not uncommon to see ?pop-up advertisements?, giving public information, using many of these features now, so perhaps this border crossing will continue to spread if marketisation continues to develop, as linguists have suggested. Throughout this discussion, I have considered several different types of electronic communication and to what extent these examples cross boundaries between speech and writing. It does seem that there is increasing evidence of border crossing between speech and writing, in most types of electronic means of communication and perhaps this is evidence of a ?shifting relationship? between the two mediums. However, as I have noted throughout, the level of border crossing seems to vary between contexts, with contexts perceived as formal maintaining a much lower level of speech elements. That is not to say that there is no border crossing at all in these more ?formal? contexts and with the continued development of technology, perhaps we will see more evidence of this ?shifting relationship? in the future. (Word count: 1,209 words) Referencing. Baynham,M. & Maybin,J. (2007) ?Literacy Practices in English? in Maybin,J., Mercer,N. & Hewings,A. (eds) Using English, London, Routledge/The Open University, pp123 ? 152. Goodman,S. (2007) ?Market Forces Speak English? in Maybin,J., Mercer,N. & Hewings,A. (eds) Using English, London, Routledge/The Open University, pp205 ? 231. Mail Online (2006). Exam chiefs ridiculed for allowing ?text speak? English answers [online], http://www.dailymail.co.uk/news/article-413866/Exam-chiefs-ridiculed-for-allowing-text-speak-English-answers.html (accessed 29 January 2011). Guardian.co.uk (2004). Texting ?is no bar to literacy? [online], http://www.guardian.co.uk/technology/2004/dec/23/schools.mobilephones (accessed 29 January 2011). ...read more.