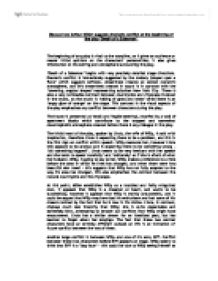 Discuss how Arthur Miller suggests dramatic conflict at the beginning of the play 'Death of a Salesman' The beginning of any play is vital to the storyline, as it gives an audience or reader initial opinions on the characters' personalities; it also gives information on the setting and atmosphere surrounding the play. 'Death of a Salesman' begins with very precisely detailed stage directions. Dramatic conflict is immediately suggested by the melody 'played upon a flute' which suggests softness, dreaminess creates an almost romantic atmosphere, and this dreaminess created in sound is in contrast with the 'towering, angular shapes' representing suburban New York City. There is also a very noticeable contrast between countryside and cityscape involved in the music, as the music is 'telling of grass and trees' while there is an 'angry glow of orange' on the stage. This contrast in the visual aspects of the play emphasizes any conflict between characters during the play. ...read more.

At this point; Miller establishes Willy as a troubled and fairly misguided man, it appears that Willy is a dreamer at heart, and wants to be successfully, however it appears that Willy is mainly unsuccessful, and it could be argued that Willy may have lost his enthusiasm and had some of his dreams tainted by the fact that he is now in his sixties. Linda, in contrast, displays much less intensity than Willy; she is quite dependable and extremely kind, attempting to smooth out conflicts that Willy might have encountered. Linda has a similar dream for an idealized past, but has learned to forget about her longings. The fact that these two central characters have an entirely different outlook on life is an indication of future conflict between the two of them. Another large conflict is between Willy and one of his sons, Biff. Conflict between these two characters before Biff appears on stage. ...read more.

In my opinion, the reason behind the conflict between Willy and his family is his outlook on life as a whole, particularly his inability to confront life with genuine integrity and faith in himself, all faith and self confidence he may appear to have is false, and his lies could arguably haunt him, this is because he has the wrong perspective on the way he should be living his life and has a certain longing for things to very different, he has grown to be very unhappy within himself, and about what his lifestyle (his home, his area) has become. The beginning of 'Death of a Salesman', therefore, is a play in which we see a number of central and significant themes being developed immediately with the help of Arthur Miller's use of techniques such as setting and symbolism. These themes include inadequacy and lacking awareness of reality. The exploration of the theme of failure within a successful society is something which has relevance for those who believed in 'The American Dream'. ...read more.