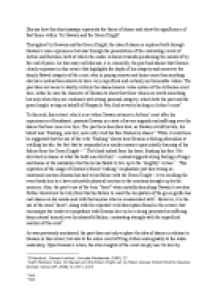 Transfer-Encoding: chunked ﻿Discuss how this short passage represents the theme of shame and show the significance of that theme within ?Sir Gawain and the Green Knight? Throughout Sir Gawain and the Green Knight, the idea of shame is explored both through Gawain?s own experiences but also through the presentation of the contrasting courts of Arthur and Bertelak, both of which the reader is drawn towards questioning the morals of by the end of poem. As this essay will discuss, it is, ironically, the grief and shame that Gawain clearly expresses in this extract that highlights the depth of his integrity and moreover the deeply flawed integrity of the court, who in prizing renown and honor more than anything else have instead been shown to have very superficial and certainly not honorable values. The poet does not seem to wholly criticize the shame-honour value system of the Arthurian court here, rather he uses the character of Gawain to show that these values are worth something but only when they are combined with strong personal integrity, which both the poet and the green knight, acting on behalf of Morgan le Fay, find severely lacking in Arthur?s court[1]. ...read more.

here as he is being presented as suffering deep internal turmoil over his shameful failure, contrasting strongly with the superficial reaction of the court[4]. As was previously mentioned, the poet does not only explore the idea of shame in relation to Gawain in this extract, but also to the entire court of King Arthur and arguably to the wider readership. Upon Gawain?s return, the other knights of the court simply react to him by ?Laughing loudly?, attempting to detract from Gawain?s shame by declaring that they will wear a similar green band to the one Gawain took from Lady Bertelak. The idea of the court as ?Laughing? is one is that explored throughout the poem. The Festival at Camelot which we are initially introduced to is described as one of ?great mirth?, whilst Arthur and Gawain are said to have ?laughed? as the Green Knight rode away from Camelot[5]. In total, the phrase ?laugh?/ ?laughter? or the present particle ?Laughing? can be found in the poem twenty-one times, suggesting that poet?s description of the court as ?Laughing Loudly? is done to demonstrate how the court has failed to change or learn as much as Gawain[6]. ...read more.