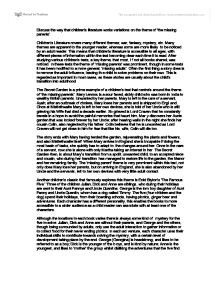 Discuss the way that children's literature works variations on the theme of 'the missing parents'. Children's Literature covers many different themes; war, fantasy, mystery, etc. Many themes are apparent to the younger reader, whereas some are more likely to be noticed by an adult reader. This means that children's literature is accessible to all ages, with different pieces of information within the text becoming clear each time it is read. After studying various children's texts, a key theme, that most, if not all books shared, was noticed. In these texts the theme of 'missing parents' was prominent, though in some texts it has been modified to a more general, 'missing adults'. Often the first thing a story does is to remove the adult influence, leaving the child to solve problems on their own. This is regarded as important in most cases, as these stories are usually about the child's transition into adulthood. The Secret Garden is a prime example of a children's text that centre's around the theme of 'the missing parents'. Mary Lennox is a sour faced, sickly child who was born in India to wealthy British parents. Unwanted by her parents, Mary is left in the care of a servant, Ayah; after an outbreak of cholera, Mary loses her parents and is shipped to England. Once at Mistlethwaite Mary is left to her own devices, she is told of her Uncle who is still grieving his Wife that died a decade earlier. ...read more.

Lyra lives at the College in Oxford, watched over by the scholars and her Uncle when he returns from his work. When children start to disappear, Lyra and her daemon are taken on a journey of a life time, under the watchful eye of Mrs. Coulter. Lyra soon discovers that Mrs. Coulter is involved in the disappearances of the children, so Lyra escapes. She is then involved in a whirlwind adventure where hers and her daemons lives are at stake. By the end of the book as a reader it becomes apparent that rather than the orphan we are introduced to, Lyra has parents. Lord Asriel (her Uncle) is in fact her Father, whilst Mrs. Coulter is her Mother. Although both abandoned Lyra in infancy, they display their love for her at varying points in the story. At a key point, Lyra is about to be separated from her Daemon, a separation that will almost certainly kill her. At the last moment Mrs. Coulter comes in and, though she has ordered this procedure done to other children, she cannot allow it to happen to Lyra. Despite this affection, Lyra is interfering with Mrs. Coulter's plans and so is a risk to the whole organisation. Also at the end, Lyra turns up at Lord Asriel's cottage, he is outraged. He intends to sacrifice a child at the Northern Lights, but he is unwilling to sacrifice Lyra. ...read more.

From the above examples, it is clear to see that 'the missing parent' theme is very prominent within childrens literature. There are many other examples, 'The Phoenix and the Carpet', ' Alice In Wonderland' and 'Little Women', to name but a few. Each Author takes a different spin on the traditional theme, taking away just one parent, or both. Maybe they die, or are absent due to war, or the child is alone only for the duration of their adventure. In conclusion, with so many childrens texts containing this theme of 'missing parents', it seems that this theme is necessary in some way to these texts. The centralisation of this theme perhaps adds a level of reality to these stories; on the transition to adulthood a child normally has experiences that are devoid of adult guidance, that though scary, change the child in the long run. This transitional period is often missed by a younger child, and is instead picked up on a later reading of the text. Furthermore, it is perhaps time to ask, 'is this theme what defines a children's book?' On the evidence above, and close reading of many other texts as a child, i argue that although it may not conclusively define a childrens book, it is an important aspect of a childrens book. There are many examples where this theme strengthens the plot of the story, involving the reader more than the author would otherwise have been able. ...read more.