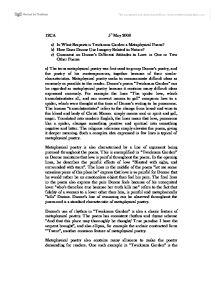 In What Respects is Twicknam Garden a Metaphysical Poem? How Does Donne Use Imagery Related to Nature? Comment on Donne's Different Attitudes to Love in One or Two Other Poems.

12CA 5th May 2003 a) In What Respects is Twicknam Garden a Metaphysical Poem? b) How Does Donne Use Imagery Related to Nature? c) Comment on Donne's Different Attitudes to Love in One or Two Other Poems a) The term metaphysical poetry was first used to group Donne's poetry, and the poetry of his contemporaries, together because of their similar characteristics. Metaphysical poetry seeks to communicate difficult ideas as concisely as possible to the reader. Donne's poem "Twicknam Garden" can be regarded as metaphysical poetry because it contains many difficult ideas expressed concisely. For example the lines "The spider love, which transubstantiates all, and can convert manna to gall" compares love to a spider, which were thought at the time of Donne's writing to be poisonous. The lexeme "transubstantiates" refers to the change from bread and wine to the blood and body of Christ. Manna simply means soul or spirit and gall, anger. Translated into modern English, the lines mean that love, poisonous like a spider, changes something positive and spiritual into something negative and bitter. The religious reference simply elevates the poem, giving it deeper meaning. Such a complex idea expressed in few lines is typical of metaphysical poetry. ...read more.

Donne uses a paradox in that, the natural beauty that was supposed to soothe his pain, makes it worse because it contrasts with his misery. Donne complains that the natural beauty of the garden mocks him. He wishes for night to come so that he may not be able to see the beauty of nature. Donne also wishes that winter would come to freeze the trees which laugh at him and which cause him so much pain "'Twere wholesomer for me, that winter did benight the glory of this place, and that the grave frost did forbid these trees to laugh, and mock me to my face". Donne then uses natural imagery in response to this: "Make me a mandrake, so I may groan here, or a stone fountain weeping out the year". At the time of Donne's writing, mandrake roots were believed to have human properties and scream when lifted out of the ground. Donne asks to be made into a mandrake root so that he may "groan" like a mandrake at his unrequited love. He then asks to be made a fountain, to that he may weeps tears, like a water fountain, at his unrequited love. Donne asks to be made part of the garden in order to be without feeling "some senseless piece of this place be". ...read more.

The image of the alchemist is also used to show that lovers may find lust during their quest for love and be encouraged by it, just as alchemists were encouraged by discovering something which smelled sweet or had medicinal properties "if by way to him befall some odoriferous thing, or medicenall." Donne uses a rhetorical question in order to challenge the belief of the reality of love "Our ease, our honour and our day, shall we for this vaine Bubles shadow pay". The "vaine Buble" is love, which is described as a shadow because it is it is feeble and false. The second rhetorical question challenges the idea that love is special "Ends love in this, that my man, can be as happy as I can; if he can endure the short scorne of a Bridegroomes play?" Donne's argument is that if he, and his servant, can both experience so-called love and get married, then there can be nothing special about love as it is commonplace. The poem that differs in attitude most clearly from "Love's Alchymie" is "The Good Morrow". It is entirely different in that it is celebration of the reality of love. It is an aubade and is although there is no dialogue from Donne's lover in the poem, there is no doubt of her presence because of the frequent use of personal pronouns "we" and references to shared experiences. ...read more.