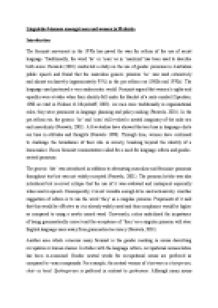 Linguistics biasness amongst men and women in Malaysia

﻿Linguistics biasness amongst men and women in Malaysia Introduction The feminist movement in the 1970s has paved the way for reform of the use of sexist language. Traditionally, the word ?he? or ?man? as in ?mankind? has been used to describe both sexes. Pauwels (2001) conducted a study on the use of gender pronouns in Australian public speech and found that the masculine generic pronoun ?he? was used extensively and almost exclusively (approximately 95%) in the pre-reform era (1960s and 1970s). The language used portrayed a very androcentric world. Feminist argued that women?s rights and equality were at stake when their identity fell under the blanket of a male symbol (Spenders, 1980 as cited in Holmes & Meyerhoff, 2003). As men were traditionally in organisational roles, they were prominent in language planning and policy making (Pauwels, 2001). In the pre-reform era, the generic ?he? and ?man? still evoked a mental imaginary of the male sex and masculinity (Pauwels, 2001). A few studies have showed that sex bias in language elicits sex bias in attitudes and thoughts (Pauwels 1998). Through time, women have continued to challenge the boundaries of their role in society, breaking beyond the identity of a homemaker. Hence feminist commentators called for a need for language reform and gender-neutral pronouns. ...read more.

Graph 1 also provides a view of Ms usage percentage across the participants. All participants, both women and men used Miss to address a female child. Only 2 women and 1 man would use Ms to address a teenage girl. Almost half (40%) of the female participants would use Ms to address a woman between the ages of 18 to 45 whereas only 23% of the male participants would use Ms to address the women in that age bracket. The difference may be due to a woman?s awareness of this issue being ?experiential? (Pauwels & Winter, 2003). A woman is more likely to come across linguistic discrimination in her past or current situation. Conversely, a man?s awareness of this issue would come second-hand from a woman in his life or being taught in work, university or school (Pauwels & Winter, 2003). The response for using the title Ms for a woman above the age of 45 is even stronger amongst female participants. It accounts for 67% while men only 46%. The other proportion of men would use the title Mrs instead. This could be due to the cultural pressure in Malaysia for women to get married by a certain age. It is thought that a ?good? woman should be married by a certain age and would most likely be married by the age of 45. ...read more.

4 (27%) Child (he) 5 (38%) 5 (33%) Gender-neutral (she/he) 4 (31%) 7 (47%) She 4 (31%) 3 (20%) Conclusion This study confirms the hypothesis that women in Malaysia do use more gender neutral pronouns/ terms and prefer the use of Ms. The generic he is still preferred by men. Nouns which are not strongly linked to any particular gender like child had pronoun usage fairly evenly spread between he, she and she/he. The usage of singular they/ their was not observed. The stereotype of a strong masculine Asian man who provides for his family while the woman stays at home may still be a strong one in Malaysia. Some terms such as humankind are still not as popular. The wave of feminism has only recently influenced Malaysia but the awareness of equality especially amongst women has definitely come along. That being said, this study had a small sample size (n=28) and may not be representative of the whole Malaysian population. Follow-up interviews may also be useful in the future as some conversations heard between participants reveal some interesting points for discussion. More future research will need to be conducted to follow this issue in Malaysia. It will also be useful to conduct an apparent time study in the future to track the trends of linguistic biasness or lack off as Malaysia actively takes on the task of improving women?s rights and to fulfil its vision of being on par with first world countries by 2020. ...read more.