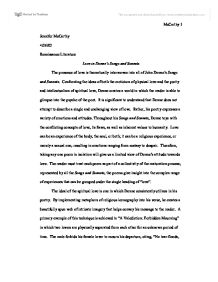 Love in Donne's Songs and Sonnets.

Jennifer McCarthy 4/26/02 Renaissance Literature Love in Donne's Songs and Sonnets The presence of love is thematically interwoven into all of John Donne's Songs and Sonnets. Confronting the ideas of both the eroticism of physical love and the purity and intellectualism of spiritual love, Donne creates a world in which the reader is able to glimpse into the psyche of the poet. It is significant to understand that Donne does not attempt to describe a single and unchanging view of love. Rather, his poetry expresses a variety of emotions and attitudes. Throughout his Songs and Sonnets, Donne toys with the conflicting concepts of love, its flaws, as well as inherent values to humanity. Love can be an experience of the body, the soul, or both; it can be a religious experience, or merely a sexual one, resulting in emotions ranging from ecstasy to despair. Therefore, taking any one poem in isolation will give us a limited view of Donne's attitude towards love. The reader must treat each poem as part of a collectivity of the maturation process; represented by all the Songs and Sonnets, the poems give insight into the complex range of experiences that can be grouped under the single heading of "love". The ideal of the spiritual love is one in which Donne consistently utilizes in his poetry. By implementing metaphors of religious iconography into his verse, he creates a beautifully spun web of intricate imagery that helps convey his message to the reader. ...read more.

Corthell hypothesizes that at this point in the poem, "...Donne misrepresents both the public domain he claims to have renounced and the erotic life he claims to embrace by denying any possible connection between them" (Corthell 90). In the second stanza, the speaker's sardonic tone conveys the ridiculousness that his love will bring life-altering repercussions to the outside world. He sarcastically states, "Alas, alas, who's injured by my love? / What merchant's ships have my sighs drowned?" (Donne 95, lines 10-11). Criticism of this poem expresses the ideology in which, "...the subject of love takes shape between misrepresentations of political and sexual pursuits that are aligned with scenes of public achievement and private retreat. While acknowledging the importance of Donne's coterie audience to his handling of this conflict, I would like to consider both Donne and the coterie on this matter in the light of contemporary perceptions of the problematic relationship between public and private" (Corthell 89). The mood and tone then shift from one of sarcastic rhetoric to making passionately bold claims in defense of his love. By using metaphorical devices to explain the depth and uniqueness of his love, Donne is able to further his argument in favor of spiritual love. Corthell notes that, "As many commentators have noted, Donne transforms the phoenix from Petrarch's image of the uniqueness of his love for Laura into a representation of both the lovers...The "one neutrall thing" is one of the most striking of Donne's assertions of oneness as a mysterious aspect of mutual love, and I think it harmonizes with several other poems of mutuality in its aim to dissolve difference. ...read more.

The speaker notes to his beloved about how small and insignificant the flea is. Comparing this aspect of the flea to the act of premarital sex, the speaker's desire grows more intense with each passing line. The idea of sexual deprivation is illustrated in the following quote, "And in this flea, out two bloods mingled be;/ Thou knowest that this cannot be said/ A sin, or shame, or loss of maidenhead, /Yet this enjoys before it woo, / And pampered swells with one blood made of two,/ And this, alas, is more than we would do" (Donne 89, lines 4-9). The male lover employs elaborate symbols of love to plead with his lover to stop denying him his carnal desire. In its simplest form, the speaker is saying that they are almost married, so why delay the inevitable? In the final stanza, the speaker makes a final and valiant attempt to coax his lover into engaging in sex. She kills the flea, turning his argument in favor of preserving her honor. Although she killed this innocent and tiny creature, her integrity is still in tact. Basically, she would not lose any more honor by sleeping with him than she did by killing the flea. The contradictory natures of spiritual love versus physical love portrayed in Donne's Songs and Sonnets sends the reader on emotional highs and lows throughout his poetry. This specific compilation of his literary works conveys a significant message that in order for love to last, the lover's relationship cannot be based entirely on physical lust. True love is love for the person's soul and inner essence, which transcends the mortal coil of existence. McCarthy 1 ...read more.