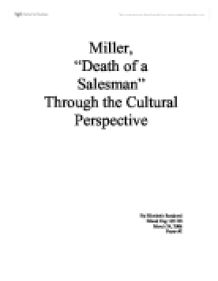 Miller, "Death of a Salesman" Through the Cultural Perspective By Elizabeth Sandoval Eiland Eng 103 DE March 24, 2006 Paper #2 "Death of a Salesman" written by Arthur Miller is about a man named Willy who has wife and children. He came to America chasing the "American Dream" in search of fortune, respect and happiness. He had high dreams for his children as well but like with most parents he was disappointed by the truth. His failures became too great for him and in the end committed suicide. Through the cultural perspective it is clear to see the differences between those who were born in America and those who come here trying to catch the "American Dream" "Although many critics see Death of a Salesman, first published in 1949, as a socio-psychological observation on the American family system or as a subversive description of free enterprise and religious convictions, playwright Arthur Miller claims that he wrote the play (in two Acts and the Requiem) in a very uncomplicated way. Miller argues that art must strive for equilibrium with truth. It is not a political bias pretending to be art because it includes the whole gamut of life. Without doubt, art holds kernels of the author's values but it must surpass the author's predisposition to attain its total figure as art" (Edwards). ...read more.

Other images are arrears, the "boxed-in" mood of Willy, the notion that his life flowing away from him as stated in the line, "The woods are burning," and Ben's, the dead elder brother of Willy, a merciless entrepreneur, rich and daring, whom Willy thinks to be his role model and "daydreams" of him, achievement and the traits that caused his triumph (Tripod). "To heighten the puzzled and bewildered state of Willy's mind, the details of the play's surroundings are meticulously avoided. There are no borders between Boston and New York or between past and present for that matter. Typically, stories are told in sequences and actions take place coherently. But when life faces a jerk out from that cool order, experiences may appear to mix together, upsetting the consistent run of "reality." Willy has suffered such a shake. As he attempts to assess and rationalize his life, his past starts sharing his present. As he speaks to Charley, he also talks to Ben, when he sits in the restaurant with Happy and Biff, he also in Boston tricking on Linda and analyzing the doubt and disappointment in Biff's eyes. Willy looks at his life as an entirety. The order of time and space does not concern him" (Edwards). ...read more.

Reality is revealed in the skinny layers of Willy Loman's American Dream; a dream developed on a life of weak options and fake values. Even though the characters are not of aristocrats nor have gallant traits, many of the factors in Death of a Salesman satisfy the standards of a Greek tragedy. The Loman's have impractical thoughts about success. To Willy, achievement is not culture or tough work, but rather "who you know and the smile on your face". Furthermore, Willy mocks Bernard for his academic success, asserting that his sons, Biff and Happy, will go more in the big business because "the man who makes an appearance in the business world, the man who creates personal interest, is the man who gets ahead. Be liked, and you will never want". Willy worships two men: his brother, the cruel and the unscrupulous Ben and an 84-year-old salesman who could "pick a phone in twenty or thirty cities and be remembered and loved, and finally honored by hundred of mourners at his funeral." Linda supports Willy to demand unfair raises, and close her eyes to the truth that Willy scrounges money to run the family expenses. For Biff, the concept of accomplishment is an undemanding loan from an ex- boss; for Happy, achievement is getting a raise by pass the time for "the merchandise manager to die." Predictably, the Loman's out of reach idea about victory is one of the reasons for their ruin. ...read more.