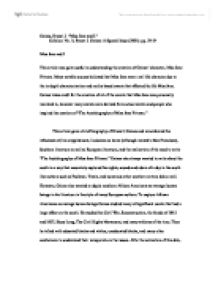 miss jane and i

Gaines, Ernest J. "Miss Jane and I." Callaloo: No. 3, Ernest J. Gaines: A Special Issue (2001): pp. 23-24 Miss Jane and I This article was quite useful in understanding the creation of Gaines' character, Miss Jane Pittman. Many notable sources believed that Miss Jane was a real-life character due to the in-depth characterization and reality based events that affected the life Miss Jane. Gaines takes credit for the creation of all of the events that Miss Jane was personally involved in, however many events were derived from actual events and people who inspired the creation of "The Autobiography of Miss Jane Pittman." This article gave a brief biography of Ernest J.Gaines and remembered the influences of; his crippled aunt, Louisiana as home (although moved to San Francisco), Southern literature as well as European literature, and the realization of the need to write "The Autobiography of Miss Jane Pittman." Gaines also always wanted to write about the south in a way that accurately captured the sights, sounds and odors of a day in the south like authors such as Faulkner, Twain, and numerous other southern writers did so well. However, Gaines also wanted to depict southern African Americans as average human beings in his literature in the style of many European authors. ...read more.

2, Black South Issue (1993): pp. 187-193 "His feet on your neck": The New Religion in the Works of Ernest J. Gaines Lee Papa questions the place of religion in the lives of black people attempting to gain freedom. In the struggle for freedom many African Americans had Christianity forced upon them, and Papa argues that this cannot be the true religion of the black people. This article assessed the religious lives of the characters of Ned, Jimmy, and Miss Jane of "The Autobiography of Miss Jane Pittman" and Charlie Biggs of "Gathering." Gaines books often examine religion as a form of personal test, ignoring the terms imposed through institutional Christianity, while reassessing and reappropriating religion in order to accept it on their own terms. We saw this in all of the characters Papa mentions in the article and we saw many of these characters die for their social convictions (that rejected institutional Christianity) and Jimmy, Ned, and Charlie's deaths all drew comparisons to being "Christ-like," however Papa argues the opposite, that there deaths occurred not as an affirmation to the system of Christianity, but as a means to achieve something more meaningful. Papa also pointed out the association of African Americans religious beliefs being rooted closer to the earth. ...read more.

Thompson, Clifford. "Call Him Ishmael." Vol. 5, Issue 1, Black Issues Book Review (2003): pp. 40-44 Call him Ishmael In "Call him Ishmael," Thompson addresses the literature and motives behind Ishmael Reed. Reed's writings were not particularly over the top because in the 1960's being "out there," was somewhat of a requirement, however Ishmael Reed never strayed from this style. Reed also has never been one to back down from controversy and this article gave an in depth view into his life and writings. Weixlmann, Joe. "Politics, Piracy, and Other Games: Slavery and Liberation in Flight To Canada." MELUS: Vol. 6, No. 3, The Ethnic Perspective (1979): pp. 41-50 Politics, Piracy, and Other Games: Slavery and Liberation in Flight to Canada Weixlmann points out in this article how Reed has shattered the mold of traditional black fiction. Reed strays from realism and seriousness and focuses on surrealism with hyperbolic comedy and satire. We also see the thematic use of games and game imagery in much of his writing. Reed's book, "Flight to Canada" tells a story of the black man's fight for freedom by escaping to Canada. Although the story takes place in the Civil War era, Reed alludes to electronic media, jumbo jets, and leisure suits. This modernizes the black man's struggle for freedom and shows the hardship that must be endured to truly be free. ...read more.