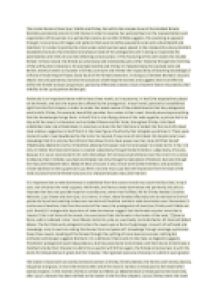 Discuss the image of the doubled female in Charlotte Bronte's Shirley, Villette and Jane Eyre.

ï»¿The central theme of Jane Eyre, Villette and Shirley lies within the complex issue of the doubled female. Brontï¿½ persistently returns to this theme in order to vocalise her personal fears on the representations and expectations of the woman in a patriarchal society. As Jennifer Gribble suggests, this vocalising is apparent through, 'a recurrence of images and patterns that seem to define prevalent social and cultural beliefs and traditions.'1 In order to portray the strain under which women were placed in the nineteenth century, Brontï¿½ repeatedly fractures the emotional and physical state of her protagonists and in doing so 'explore(s) the potentialities and limits of a central reflecting consciousness.'2 This fracturing of the self creates the 'double female' in these novels, the female as consciously and emotionally split, either implicitly through the mirroring of the self by other characters, for example Caroline and Shirley or metaphorically, for example Jane and Bertha. Brontï¿½ seeks to illustrate in Shirley, Jane Eyre and Villette the impossibility of obtaining knowledge of self and of reclaiming self hood, faced by all of her female characters. In doing so, Charlotte Brontï¿½ viscously attacks not only patriarchy, but also the actual act of defining the woman, and suggests that in an effort to define the female to exact proportions, patriarchy effectively creates a race of women forever haunted by their inability to live up to patriarchal designs. Patriarchy is an important theme within these three novels, as it represents, in itself, the expectations placed on the female, and also the repression suffered by the protagonists. In each novel, patriarchy is established right from the first chapter, in order to render the reader aware of the establishments that the protagonists seek to defy. Shirley, for example, beautifully parodies the curates at their meal, literally devouring everything that the housekeeper brings them. In itself, this is a terrifying picture of the male appetite, a picture that is to stay with the novel, in characters such as Robert Moore and Mr Yorke, throughout Shirley. ...read more.

The protagonists will all finish their pilgrimages married because the only alternatives are to become Miss Marchmont, Miss Mann, or Miss Ainsley. Yet Brontï¿½ pushes her protagonists further along the road of self-discovery in order to render them aware that unless they come to terms with the inevitably closeted world of the female, their pilgrimage will never end, and the consciousness will remain fractured. Wholeness of self, Brontï¿½ argues, can only be achieved through acceptance of patriarchy, and it is denial of patriarchy and subscribed views of the female that create the fractured self of the female. Indeed, it is noticeable that, in the cases of all the protagonists, Brontï¿½ initially sets up the female to become quiet, calm and subdued, and the remaining part of her narration destroys any sense calm because the search for wholeness can only be achieved through the destruction of the status quo. It seems that Brontï¿½ was greatly concerned about the effects of suppressing the woman, it can only be maintained so long, she suggests, before the repressed consciousness splits, break s down and becomes tormented. 'Indeed there was no way to keep well under the circumstances,'28 says Lucy when she is left alone to wrestle her own thoughts during the long vacation. This phrase of Lucy's, it seems, epitomises the impossibility of maintaining wholeness of consciousness for all of the protagonists. Jane is so closely, repeatedly, connected with the character of Bertha Rochester. Bertha embodies the s****l, wanton aspect of Jane's needy personality. Jane not only needs to be freed from the confines of her governess position, but also literally depends upon its destruction in order to save her life. It is only when Jane is in the presence of Bertha, in the direct vicinity of her 'darkest twin,' the woman who actively lives the hidden aspects of Jane's desires that Jane is able to break out of her governess cocoon. ...read more.

In short, although Shirley haunts Caroline, doubles her emotions and acts out urges that Caroline cannot, '[T]hat Shirley is Caroline's double, a projection of all her repressed desire, becomes apparent on the acts she performs for Caroline,'53 each woman is reduced to the same fate. Shirley, 'becomes enmeshed in a social role that causes her to duplicate Caroline's immobility.'54 Shirley, the masculine she hero/devil of the novel, is ultimately defined by the same terms which define Caroline, Lucy and Jane, she is defined as immobile because she is a woman. In these three novels it can be seen that Brontï¿½ expresses her fear for the future of women by displaying to the reader fundamentally independent women who seek to be dominated by a patriarchal society. The independence of Lucy, Caroline, Shirley and Jane is undermined not only by the pressure of a male dominated society, but by each protagonist's fear of defying the status quo. This knowledge of independence, coupled by the desire to come to terms with and acknowledge the true self, splits each of the protagonists because their desire to submit to the male defeats their personal aims. This splitting of the consciousness causes the female to desperately seek herself, or images of herself, in other people. Each novel ends with the protagonist married, which suggests to the reader that Brontï¿½ insisted on portraying the lot of the nineteenth century woman as confined and dependent on the male, because submission through marriage was the only end a woman could aspire to. Alternative options were simply unavailable. Ambiguously, however, Brontï¿½ ends her final novel Villette on a rather more hopeful tone. Does M. Paul survive, one asks at the end of the novel. One can only hope not, for M.Paul's return could only lead to a life of submission already imparted to Jane, Caroline and Shirley, the life of the female determined to find herself outside of herself, in images of women not trapped as they find themselves to be. ...read more.