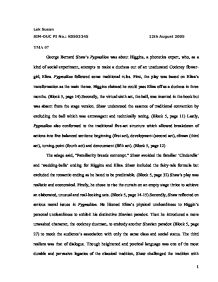 Pygmalion's title harkened from its predecessor, Ovid's Pygmalion which accounted a woman-hating sculptor falling in love with his own sculpture of his desired image. Wide Sargasso Sea referred to the sea surrounding Dominica, the setting of Jean Rhys's

Lek Susan SIM-OUC PI No.: K0503345 12th August 2005 TMA 07 George Bernard Shaw's Pygmalion was about Higgins, a phonetics expert, who, as a kind of social experiment, attempts to make a duchess out of an uneducated Cockney flower-girl, Eliza. Pygmalion followed some traditional rules. First, the play was based on Eliza's transformation as the main theme. Higgins claimed he could pass Eliza off as a duchess in three months. (Block 5, page 14) Secondly, the virtual sixth act, the ball, was inserted in the book but was absent from the stage version. Shaw understood the essence of traditional convention by excluding the ball which was extravagant and technically taxing. (Block 5, page 11) Lastly, Pygmalion also conformed to the traditional five-act structure which allowed breakdown of actions into five balanced sections: beginning (first act), development (second act), climax (third act), turning-point (fourth act) and denouement (fifth act). (Block 5, page 12) The adage said, "Familiarity breeds contempt." Shaw avoided the familiar 'Cinderella' and 'wedding-bells' ending for Higgins and Eliza. Shaw included the fairy-tale formula but excluded the romantic ending as he hated to be predictable. (Block 5, page 32) Shaw's play was realistic and economical. Firstly, he chose to rise the curtain on an empty stage thrice to achieve an elaborated, unusual and real-looking sets. ...read more.

Rhys celebrated Dominica, its beauty, sensuality and resistance to imperialism but the sea surrounding Dominica, the setting of Rhys's novel was ironically not mentioned in the text. Rhys exposed the gulfs that existed between people due to different races, genders and imperialism. (Block 5, page 196) She advocated that it was not only black and white who were separated by the gulf of unknowability, men and women were seen as equally alien to each other and it was not madness that divided them but existential loneliness. (Block 5, page 200) Rhys exposed Antoinette's husband's emptiness and weakness. "So this place is as lonely as it feels?" (Rhys 2000, page 74) She also disclosed the inability of the male and the reluctance of the colonialist to understand the female. "The land was seen like the body of a woman, something to be possessed (Rhys 2000, page 54), was never accepted for what it was and it was always wrong and malignant." Rhys also repudiated the slander that Creoles were degenerate, and that their madness was inherited as a consequence of 'bad' breeding. (Block 5, page 185) Critics debated the merits of Wide Sargasso Sea that it relied closely on Jane Eyre and could not stand alone. ...read more.

Pygmalion was a comedy. Beneath the comedy lies a satire on the superficiality of class distinctions. This is made explicit in Eliza's father, Doolittle, who calls himself one of "the undeserving poor" Shaw aimed to ridicule the society and mock the absurdities of life. He once said, "When a thing is funny, search it carefully for a hidden truth". In contrast, Wide Sargasso Sea was a tragedy. I felt strongly that this novel had not only left the readers but also the author a deep sense of emotional and psychological cleansing as the novel had rescued her from obscurity into which she had fallen. (Rhys 2000, page v) There was a lesson to be learnt here by the readers not to see only one side of the coins. Pygmalion's title harkened from its predecessor, Ovid's Pygmalion which accounted a woman-hating sculptor falling in love with his own sculpture of his desired image. Wide Sargasso Sea referred to the sea surrounding Dominica, the setting of Jean Rhys's novel. The Sargasso Sea was a large area of sea in the Atlantic Ocean near the West Indies where currents moved around it and was often still but haunting. Its stories were like the weeds of the Horse Latitudes which entangled together and were difficult to unravel. ...read more.