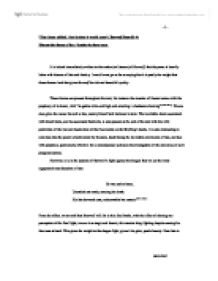 'That doom abided, / but in time it would come' (Beowulf, lines 83-4) Discuss the theme of fate / destiny in these texts.

'That doom abided, / but in time it would come' (Beowulf, lines 83-4) Discuss the theme of fate / destiny in these texts. It is indeed immediately evident to the reader (or listener) of Beowulf, that the poem is heavily laden with themes of fate and destiny. I would even go as far as saying that it is partly the weight that these themes lend that gives Beowulf its rich and beautiful quality. These themes are present throughout the text, for instance the creation of Heorot comes with the prophecy of its doom, with "its gables wide and high and awaiting / a barbarous burning" (lines 82-3). We are also given the cause for such a fate, namely blood feud between in-laws. The inevitable doom associated with blood feuds, and its associated fratricide, is also present at the end of the text with the wild prediction of the war and destruction of the Geat nation at the Shylfing's hands. ...read more.

However, if this is to be considered as evidence of the Anglo-Saxon concept of doom, then in the poem we are also able to see the Christian equivalent, which can perhaps be better referred to as divine providence. In this interpretation of destiny, there is an integral component of judgement, whereby destiny is set out by God. This approach to destiny can be seen at numerous points, for example "a comfort sent / by God to that nation" (13-4). Here we can clearly see the influence of Christian beliefs in the narrative voice of the poet. The evidence of divine intervention can be found elsewhere in Beowulf, for example in his fight against Grendel's mother: It was easy for the Lord, the Ruler of Heaven, to redress the balance once Beowulf got back on his feet. (1554-6) This has the effect of showing that all outcomes are ultimately attributable to God, here reinforcing the positive characterisation of Beowulf by essentially saying that God is in support of him. ...read more.

In a number of ways the heroic characters are distanced from the paganism that they historically must hold, in particular they adhere to characteristically Christian formulas of worship. An example of this is "They thanked God / for that easy crossing on a calm sea" (227-8), which is instantly recognisable as an un-pagan thanksgiving to the providence of a single God. Indeed, throughout Beowulf there are signs that these pagans worshiped a monotheistic precursor to Christianity, rather than the polytheistic idol worship that would be extremely difficult to excuse from a Christian viewpoint. Thomas D. Hill points out that this would allow an approach similar to later humanists, such as Dante who placed such figures as Aristotle, Cato and Rifeo (all pagan) variously in hell, limbo or heaven. This in turn has the effect of allowing the providence theme to sit alongside that of doom because the distancing of the heroic characters from paganism conversely allows their more believable association with God's fate. To further this effect, there is a selective assimilation of Christian sources into the poem. ...read more.