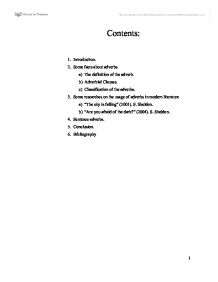 The aim of this research work is to study the peculiarities of the usage of adverbs in the Modern English language. The choice of this research is predetermined by the necessity to explore the usage of adverbs and not just their place in written English but their role in Modern Spoken English. The urgency of this research work consists of many things. For example, many modern students dream about working or studying abroad. So without studies of the peculiarities of the usage of this part of speech they can come across with misunderstanding. Besides, we can’t forget that the foreign languages faculty is one the most prestigious in the higher educational institutions.  Not all languages use adverbs so widely but English does. It is clearly seen in such courses as “Matrix”, “Opportunities”, “Headway” and others. There are a lot of interesting and not typical cases of the usage of adverbs especially in spoken English. Despite the fact that we study adverbs at school, we need to know about this part of speech more to catch native speakers, to be properly understood by them, while traveling abroad or studying there, or communicating on the Internet. All these reasons have motivated us to study adverbs thoroughly.

So, what do we know about adverbs? Not very much indeed. An adverb is a part of speech. It is any word that modifies any other parts of language: verbs, adjectives (including numbers), clauses, sentences and other verbs except for nouns; modifiers of nouns are primarily determiners and adjectives.

An adverb may be a single word such as quickly, here or yesterday, or a phrase such as the day before yesterday or to see my mother. Adverbs typically answer the questions such as how, when, where, why and to what extent. This function is called the adverbial function, and realized not by just single words but by adverbial phrases and adverbial clauses. Adverbial clauses can contain a subject or a full verb.

As you can see from the examples above, most adverb clauses can be recognized because they are introduced by a particular word or phrase (such as when, so that, etc.).

As for the native linguists we can see that a lot of them try to systemize their approach to the adverb, therefore there are so many different names of the same phenomenon: e. g.: modifier, sentence adverb, sentential adverb (really, highly, totally, utterly, rather, pretty, slightly, a little bit, etc.)

According to their lexical value and syntactic role adverbs are divided into the following kinds:

But not all languages use adverbs so widely, because their role may be replaced by other parts of speech. While searching we came across with the article “Manner Adverbs in the Author’s Discourse”. The author writes “Adverb has been identified as “perhaps the least studied and most maligned part of speech”. And it’s no wonder. In spite of the fact that adverbs provide an interesting field for studying of the relations between syntax and semantics and the nature of the syntax – semantics interface in general, it is one of the least studied parts of speech now.

Moreover, our world is not such simple that we could talk about it in plain straight forward clear-cut notions. Its description requires rather a complex language, able to express exact distinctions and finer shades of meaning. Grading, intensifying and minimizing are almost constant characteristics of our speech. Adverbs are widely used in the author’s language to transfer some general meaning or to point something out or intensify something. And the best way to illustrate mentioned above is to give examples from the modern literature. So, Sidney Sheldon’s “The sky is falling” (2001) and “Are you afraid of the dark” (2004) were taken for research work. The most frequently used adverbs were singled out such as only, slowly, patiently and tightly. More then that suddenly, absolutely, well, in fact can be seen nearly on every page. Ratio of different kinds of adverbs is shown with the help of the diagrams: 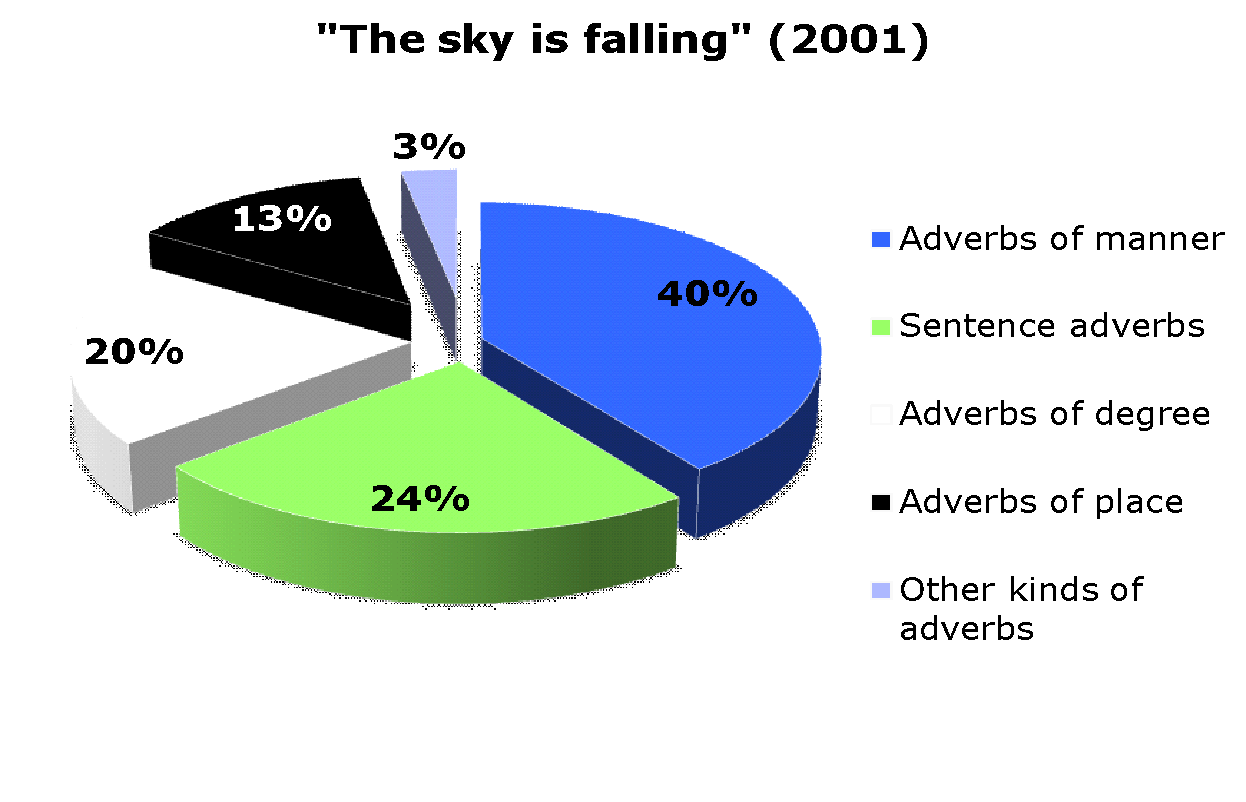 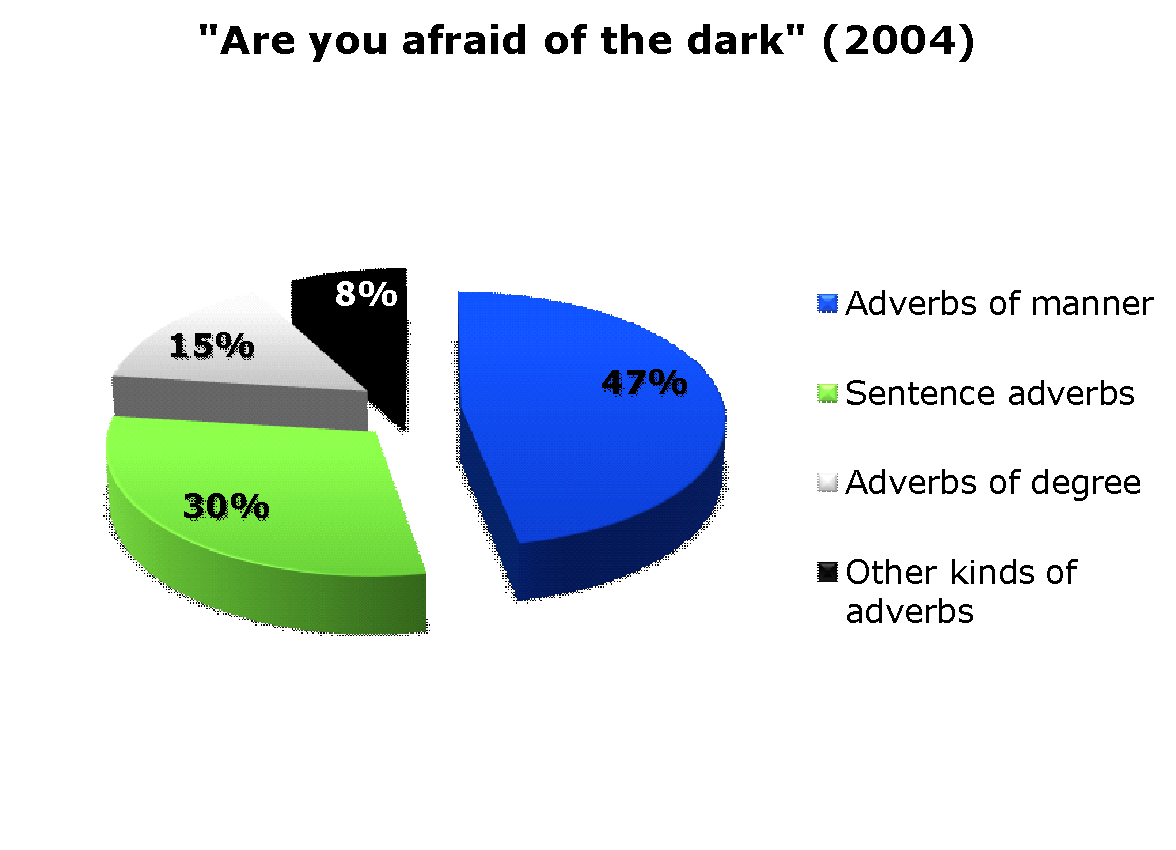 However, modern linguists recognize that words traditionally grouped together as adverbs serve a number of different functions. Some linguists would go so far as to call adverbs a “catch-all” category that includes all words that don’t belong to one of the other parts of speech. A more logical approach to dividing words onto classes relies on recognizing which words can be used in a certain context. For example, some adverbs can be used to modify an entire sentence, whereas other cannot. Even a sentence adverb has other functions; the meaning is often not the same. In the sentence “She gave a birth naturally” and “Naturally, she gave a birth”, the word naturally has a different meaning. Actually the first sentence could be interpreted in the same way as the second, but a context makes it clear what is meant. Naturally as a sentence adverb means something like “of course” and as a verb-modifying adverb means “in a natural manner”.

There is something curious with adverbs, especially with sentence adverbs, in English nowadays. They are used more frequently excluding the words yes, no, not at all. In dialogues while exchanging opinions, people replace yes with absolutely, right, very much so. On the other hand no is often emphasized with no way.

Look at the dialogue:

A: I think people who do that sort of thing deserve a prison sentence.

A: Do you feel they should get away with just a fine?

A: So you agree with me then?

So we can see that the wide usage of adverbs and their number increase show the dynamic development of the English language from the point of view of its expressiveness.

To sum it up we want to underline that this theme is rather interesting in linguistics. During our research we came to a conclusion that it’s necessary to know a lot about adverbs, because of many reasons.

Firstly, there is no communication without adverbs.

Besides, we couldn’t understand native speakers without knowledge of some peculiarities of the usage of adverbs.

Moreover, it will help students to pass different language exams, to take part in different educational programs such as “Flex”, “Le Guide” etc., to read books in original, to see foreign films .

Adverbs are not facing extinction and are widely used in Modern English.