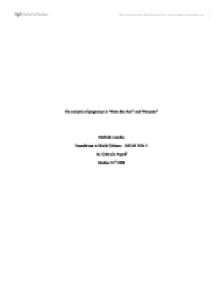 The analysis of pregnancy in Pietro the Fool and Peruonto

The analysis of pregnancy in "Pietro the Fool" and "Peruonto" Mathilde Jourdan Foundations in World Cultures - AHUM 1416-3 Dr. Gabrielle Popoff October 14th 2009 Both short folk stories "Pietro the Fool" by Giovanfrancesco Straparola and "Peruonto" by Giambattista Basile tell of a poor, dim and common boy who, upon being insulted by a girl from an upper social class, makes her pregnant by means of magic - and eventually marries her. Both Pietro and Peruonto are luckless heroes whose fortunes are changed by this magic act of conception. The theme of pregnancy reveals a lot about gender roles, social class issues and the kind of patriarchic society the 'heroes' live in. It ties together all kinds of interesting aspects of life in those times. Hence by analyzing these stories, one can get a better idea of the social conditions of the time those characters live in. These tales reflect a male viewpoint in which the hero seeks revenge for the emasculating comments made by a young Princess, causes her life to take a toll for the worse, and then rises to power. ...read more.

A woman's body was considered a possession of her male relatives, father at first and later husband - so the girl's unauthorized pregnancy was seen as a violation of her father's rule. In both these stories, the father's pride was hurt to such an extent that considers killing his own daughter: as described in "Pietro the Fool", the king "decided to have his daughter killed to avoid the disgrace and vicious gossip." (102) In keeping with this old-fashioned view of gender roles, the women in these stories are more understanding and submissive than the males. In "Pietro the Fool", the Queen seems more concerned about the actual well-being of the Princess than about her Palace's reputation. She is in denial about the Princess's fate and strives to attribute the young girl's visible swelling to various incurable diseases. When the King orders the childbearing Princess to be killed, the Queen begs her husband to be compassionate and to spare her until the child is born. ...read more.

It must be also be noted, finally, that in both these tales the heroes goes through positive transformation, making their stories rise tales, whilst the Princess start out in a position of power, lose it all, and then regain it - thereby having a restoration process. Both Pietro and Peruonto wish for something without knowing where it will take them - and it is only due to the woman's intelligence and skill that their stories result in a traditional, fairytale happy ending. If the princesses hadn't taken charge of the wishing and asked for all the positive transformations to take place, their lives would've ended miserably. Although there maybe a few small differences between these two tales, primarily in the way they are told, by examining the storylines though the topic of pregnancy it is easy to conclude that the male-dominated society of the time plays a very important role in the plot and development of the story. Both social class and gender define the characters and shape the story, and the motifs of the miraculous pregnancies are critical for understanding these tales. ...read more.