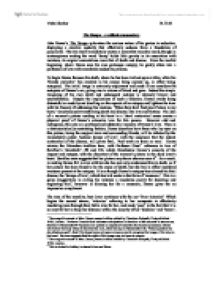 The Dampe- a critical commentary.

The Dampe - a critical commentary John Donne's, The Dampe epitomises the curious nature of his genius in seduction, displaying a creative audacity that effectively seduces from a foundation of peculiarity. The title itself immediately creates a somewhat macabre mood; though in contemporary reading the word 'damp' holds little gravity in its association with moisture, its original connotations were that of death and disease. From the morbid beginning, where Donne sees his own grotesque autopsy, he gently slides into a profession of love with remarkable seductive prowess. To begin Donne foresees his death, where he has been laid out upon a table, while his 'friends curiositie' has resulted in his corpse being opened up, in effect being autopsied. The initial image is extremely unpleasant and crude if one considers the autopsies of Donne's era, giving rise to visions of blood and gore. Indeed the simple imagining of his own death and subsequent autopsy is intensely bizarre and uncomfortable. Despite the implications of such a situation, Donne avoids being distasteful or crude by not dwelling on the aspects of an autopsy and lightens the tone with his fluency of addressing his mistress, 'When they shall find your Picture in my heart,' simultaneously transforming death and disease into love and fantasy. ...read more.

It is as though Donne's autopsy has released his fatal disease, the 'dampe of love', which has laid waste in the form of 'massacre'. This is a gross exaggeration in calling his mistress a murderess purely for deserting and neglecting him3, however in blaming her for a massacre, Donne gives her an impressive compliment. The tone of the sensitive, hurt lover continues with the cry 'Poor victories!' Which begins the second stanza; 'victories' referring to her conquests in effectively murdering men through their futile love for her, and made 'poor' in the fact that it is so easy for her to keep her distance within the security of her 'disdaine' and 'honor', which are introduced later. This idea is further with Donne's seductive and slightly challenging tone, 'But if you dare be brave...kill th'enormous Gyant your Disdaine,/And let th'enchantresse Honor, next be slain'. Donne personifies his mistress' 'Disdaine' and 'Honor' as the chief barriers to their joy. The destruction of the latter is clearly intended to undermine her decision to deny him sex. 'Honor', in its association with magic, creates a sense of enticement as if her resistance is a significant enticement, adding a spellbinding quality to her ability. ...read more.

His 'Secretnesse', implies that he is seducing a married woman. However, he states, 'these I neyther looke for, nor professe', simply presenting the idea that he too if he wished could 'muster up' his forces in attack6. Donne then uses the metaphor of dying as an indication of orgasmic pleasure, 'Kill me as woman, let mee die/ As a mere man', creating an antithesis between the action, 'kill' and the resulting death, 'die', representing the sexual intercourse and subsequent climax of pleasure. The final seduction is then introduced as an elegant compliment stemming from the notions of women being inferior to men. 'Naked you'have odds enough of any man', naked, she is lovely enough to defeat any man. However the witty compliment lies in her 'passive valor', and the deeply provocative image of her it creates that would appeal to most girls of intelligence7. From a morbid, unpromising beginning, where Donne visualises his corpse being cut open and surveyed in rather a grotesque manner, he smoothly slides into an elegant poem of love and seduction. Death is transformed, with fantastic metaphors, into something fertile and delicious and a poem, which initially appears to attack and undermine his mistress, ends up as one in supreme awe of her. ...read more.