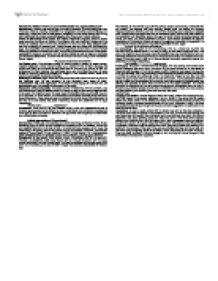 Discuss Poet Mathew Arnold as a poet of Melancholy? As a representative poet?Introduction:- Victorian age was an age of industrial revolution. The first railway train was introduced

Discuss Poet Mathew Arnold as a poet of Melancholy? As a representative poet? Introduction:- Victorian age was an age of industrial revolution. The first railway train was introduced. Science, industry, materialism had progressed. Industries were multiplying and expending. There was more or less general prosperity and the entire society was running after materialistic life. People were just enjoying a life of luxury and material pleasure. Cause of Melancholy in his poem:- But despite materialistic progress, Victorian people were becoming mundane and atheist. The religious faith was declining. People could not believe on anybody even on their own relatives and near and dear ones. Religious belief was not increasing on people's mind. People always see each other with the suspicious eyes. The materialism and scientific ideas of his age shook Arnold's faith. He found himself wandering between two worlds one dead, and the other powerless to be born. Dover Beach expresses his religious uncertainty and his spiritual distress as well as religious uncertainty and skepticism (Skepticism). He wants that his beloved wife would not go after materialistic life and urges:- " Ah, love let us be true to one another." An Elegiac poet:- The distinctive quality of Arnold's poetry is feeling of regret, sorrow, despair, resignation. ...read more.

He wrote so many elegies, which reveal the melancholy in his poetry. Most of his poems have an atmosphere of sadness. One of these elegies is "Dover Beach". It was published in 1867 in New Poems. It is a representative poem of Mathew Arnold. It expresses a mood of sad reflection, which is typical of Arnold. Background of the poem:_ Poet Mathew Arnold, immediately after his marriage with Frances Lucy Wightman, visits Dover Beach with her. Though the poet is with his newly married life partner, he does not feel happy. He does not compose any romantic poem but a poem full of laments ,on the loss of faith in religion that was the characteristic of Victorian age. The Theme:- In the Victorian age (19 the century) people were bearing materialistic life and atheist. The religious faith was declining. people could not believe on anybody. Religious belief was declining and hold of doubt and uncertainty was increasing on peoples mind. People always see each other with the suspicious eyes. Arnold's faith was shaken by the materialism and Scientifics ideas of his age. He found himself wandering between two worlds, one dead, and other powerless to be born. ...read more.

He is classical by reason of the exquisite harmony of tone, the measured fitness, the sweet reasonableness and the liquid, clearness of style. His words are capable to carry his sad thoughts but it gives a didactic suggestion. His words are not to revolt but remain calm. Conclusion:- In such a world, where faith is absent, love can be the only consolation. Hence the poet asks his beloved to be constant in her love, he tells her that although the world looks new and beautiful like a fairyland, yet it does not have any charm. It is without happiness, love, light, certainty, peace and help. The world in the varied forms appears attractive and charming life ,a land of dreams, but in fact is possesses nothing to heighten the spirit. It is devoid of all good things that fill the world with great and real cheerfulness. The people of the world have lost the real aim of life. They are not better than soldier go on fighting in the darkness of the night. They are so confused that they don't know why and with whom they are fighting similar is the state in which the people of the world are found. They are utterly confused in life and struggle in vain. As they don't know the goal of life, their efforts do not take them anywhere. ...read more.