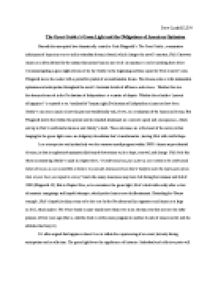 ﻿Steve Lundell L354 The Great Gatsby?s Green Light and the Obligations of American Optimism Beneath the unrequited love thematically central to Scott Fitzgerald?s The Great Gatsby, a ruminative indictment of American excess and its attendant dream is found, which changes the novel?s narrator, Nick Carraway. America is often defined by the notion that anyone born in any set of circumstances can be anything they desire. Circumnavigating a green light referenced by Jay Gatsby in the beginning and then espied by Nick at novel?s end, Fitzgerald leaves the reader with a powerful symbol of an unobtainable dream. This dream seduces with indomitable optimism and anticipation throughout the novel?s luxuriant details of affluence and release. Whether this was the dream referenced in the Declaration of Independence is a matter of dispute. Whether the relentless ?pursuit of happiness? is equated as an ?unalienable? human right (Declaration of Independence) may not have been Gatsby?s concern as much as how his pursuit would finally end, if ever, in a realization of the American Dream. But Fitzgerald shows that within this pursuit and its intended attainment are corrosive spoils and consequences, which end up in Nick?s newfound awareness and Gatsby?s death. These outcomes are at the heart of the novel, in that longing for the green light causes an obligatory dissolution that?s transformative, leaving Nick with wistful hope. ...read more.

In vying for an intense campaign battle, politicians and the constituents who place their hopes in them, are ?reaching farther? and ?running faster?, much like they might in their day-to-day lives (180). And for the apolitical, the green light?s optimism is still very personal. Metaphorically, one?s life is a navigable boat, in working against the innumerable currents - physical: inertia and entropic disorder; existential: the reality of death; and social: family (genetic and relational), race and class, along with the educational access which can define the dynamics of economic opportunity ? they define, or have defined for them, their own green light. Such opportunities purportedly thrive on myths of meritocratic pluck and ingenuity, especially within the milieu of pseudo-capitalistic competition, as workers, entrepreneurs, speculators, and the like strive toward their attendant Green Lights. However, the complexities of these ?currents? that Nick mentions intersect as the tremendous opportunity some call ?American Exceptionalism?; in that the first new nation in the new world rooted on expressed, but illusory, concepts like individualism, egalitarianism, and laissez-faire (?American Exceptionalism?). These green light ideals are foundative elements in the novel. This milieu furnishes optimism and audacity, in that Gatsby ?...invented just the sort of Jay Gatsby that a seventeen year old boy would be likely to invent, and to this conception he was faithful to the end? (98). It?s within this observation that the American ideal of ?starting over? is found. ...read more.

It was all very careless and confused. They were careless people, Tom and Daisy ? they smashed things up and creatures and then retreated back into their money or their vast carelessness, or whatever it was that kept them together, and let other people clean up the mess they had made? (179). One finds the roles of American financiers and the cultural and governmental endorsements that brought the world to financial ruin four years ago. And yet despite such calamity, the green light embodies a human relation to memory and history, the limits within an individual and without. These limits are best embodied by Gatsby?s death and its relation to doomed business ventures (a cautionary tale?), not to mention Daisy?s disappearance. The Green Light shines to Nick from its distant vantage, providing a meaningful meditation on life and death that only came as a result of the novel?s journey. At the risk of producing New Age brochure fodder, there?s a distinct futility within the ceaseless craving and striving that defines not just Americans like Gatsby, Nick, and Daisy, but humans everywhere. But especially Americans, in that the environment encourages an incessant drive to reach and realize an idyllic elsewhere of plenty, constancy, and prosperous, envious security that Fitzgerald understood and may have succumbed to. As for the rest of us humble and voracious Americans, the Green Light is a reminder that we can always compensate for past deprivations with the glow of our forgiving futures. ...read more.