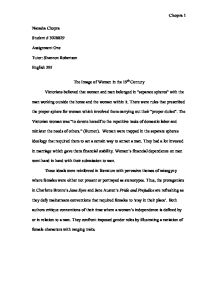 The Image of Women in the 19th Century - the protagonists in Charlotte Brontes Jane Eyre and Jane Austens Pride and Prejudice are refreshing as they defy mainstream conventions that required females to stay in their place.

Natasha Chopra Student # 3028829 Assignment One Tutor: Shannon Robertson English 395 The Image of Women in the 19th Century Victorians believed that women and men belonged in "separate spheres" with the man working outside the home and the woman within it. There were rules that prescribed the proper sphere for women which involved them carrying out their "proper duties". The Victorian woman was "to devote herself to the repetitive tasks of domestic labor and minister the needs of others." (Burnett). Women were trapped in the separate spheres ideology that required them to act a certain way to attract a man. They had a lot invested in marriage which gave them financial stability. Women's financial dependence on men went hand in hand with their submission to men. These ideals were reinforced in literature with pervasive themes of misogyny where females were either not present or portrayed as stereotypes. Thus, the protagonists in Charlotte Bronte's Jane Eyre and Jane Austen's Pride and Prejudice are refreshing as they defy mainstream conventions that required females to 'stay in their place'. Both authors critique conventions of their time where a women's independence is defined by or in relation to a man. They confront imposed gender roles by illustrating a variation of female characters with ranging traits. Jane Eyre's Jane is a rebel against the feminine ideal of domesticity she explicitly challenges conventions that the mid-nineteenth century woman was subject to. She openly expresses her passions upon being provoked by Rochester she exclaims, Do you think, because I am poor, obscure, plain, and little, I am soulless and heartless? ...read more.

Take for example Jane's widowed aunt, Mrs. Reed who has minimal power under English law and thus must pander to the wishes of her son who will inherit the fortune once he is of age. (Burnett) She has limited choices as not only was she forced to care for her niece by her husband but also has to rely on her son to take care of her later on. She persistently attempts to uphold patriarchal structures, even if it is injurious to female liberty. She rebukes Jane for not being the characteristic submissive female and goes as far as to compare her to an animal, "as if an animal that I had struck or pushed had looked up at me with human eyes and cursed me in a man's voice" (Bronte 533) She evokes animal imagery to imply that Jane acted in an uncivilized manner and animals do not follow the laws of the social world. Mrs. Reed is herself a victim of a misogynistic society as her son squanders away all the money and she dies alone. It is clear that Bronte is critiquing her anti-feminist ways by dealing her such an end. Another notable female in Jane Eyre is Blanche Ingram to start with her name is French for white, which symbolizes purity as well as blankness much like her personality that lacks substance. Blanche is Bronte's clever juxtaposition the absolute opposite of Jane. She is the marriageable type of woman that society would expect someone of Mr. ...read more.

At balls, "[she] had been fortunate enough to be never without partners, which was all that they had yet learnt to care for at a ball" (Austen 51). Her concern is to socialize, flirt and chase men. Her antics culminate in a scandalous marriage to Mr. Wickham; yet she does not consider the event sensibly, priding herself on being the first Bennet girl to wed. Following her marriage she declares, "Ah! Jane, I take your place now, and you must go lower, because I am a married woman." (Austen 322). Lydia's insolent manner of announcing superiority to her sibling that was attained by such improper means comes across as ridiculous. This portrait of Lydia could be Austen's way of urging aspiration that went beyond seeking a husband to depend on. The image of women in the 19th century was based on the assumption that females were biologically inferior to males both mentally and physically. Literature reflects the views of a time period and as such women were hardly given a voice in novels. Jane Austen and Charlotte Bronte's heroines clearly deviate from the norm as can be seen when contrasting them with other female characters within the respective works. Pride and Prejudice and Jane Eyre depict protagonists that are unable to identify with the traditional ideal of women. The novels can be seen as didactic in the sense that those females that champion misogynistic views do not fare well whereas the feminist ones have happier ends. The dominant nature of patriarchy is undeniable in literature yet decades of suppression finally resulted in feminist movements as such the image of females began to change in both literature and society. ...read more.