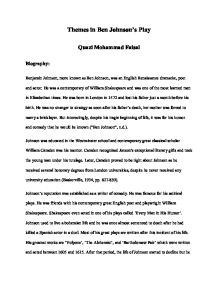 Themes in Ben Johnson's Play Quazi Mohammad Faisal Biography: Benjamin Johnson, more known as Ben Johnson, was an English Renaissance dramatist, poet and actor. He was a contemporary of William Shakespeare and was one of the most learned men in Elizabethan times. He was born in London in 1572 and lost his father just a month before his birth. He was no stranger to strategy as soon after his father's death, her mother was forced to marry a bricklayer. But interestingly, despite his tragic beginning of life, it was for his humor and comedy that he would be known ("Ben Johnson", n.d.). Johnson was educated in the Westminster school and contemporary great classical scholar William Camden was his mentor. Camden recognized Jonson's exceptional literary gifts and took the young man under his tutelage. Later, Camden proved to be right about Johnson as he received several honorary degrees from London universities, despite he never received any university education (Baskerville, 1934, pp. 827-830). Johnson's reputation was established as a writer of comedy. ...read more.

The play is set in London on a wealthy old man named Morose who has obsessive hatred of noise. He is childless and his nephew is his inheritor. But he doesn't like the idea of his nephew inheriting wealth and decide to disinherit him by marrying. But the marriage backfires and he is actually trapped as the whole marriage is a setup. He files a divorce but ended up with being dismissed as his wife turns out to be a male. The Alchemist has a relatively different plot where a Spanish shepherd named Santiago starts his journey for Egypt after he is directed by some strange dreams. His journey has its ups and downs. He gets rich but then everything is taken away from him. Then he gets to meet with an alchemist, someone with supernatural power who helps him to reach the pyramids of Egypt. But eventually he finds there is nothing. He meets a stranger who tells him about one of his that is similar to Santiago's one but the place to find the treasure is Spain, not Egypt. ...read more.

So, in all three cases justice finally triumphs and all the characters meet the end what they deserve (Sanchez, 2006). Finally, in Johnson's above mentioned plays, he tried to show the standing of woman in the society. He showed how they were pressed down and was seen more as merchandise than as human. Like in Volpone, Corvino used her beautiful wife to get the wealth of Volpone. Similarly, in Epicoene an imaginary lady is used to earn financial benefit from the old Morose. Johnson also depicts the female characters with strong characteristic like faithfulness. In Volpone and The Alchemist, both Celia and Fatima are devoted for their husbands and have been very loyal too. Conclusion: Johnson used satire to expose the follies and vices of his age, attacking greed, charlatanism, and religious hypocrisy as well as mocking the fools who fall victim to them. After Shakespeare, he was regarded as the best playwright of the Elizabethan era. Johnson died in 1637 and is buried at Poet's Corner in Westminster Abbey. Just like the way he used to write comedies, epitaph in his grave has the insightful inscription "O Rare Ben Johnson. ...read more.