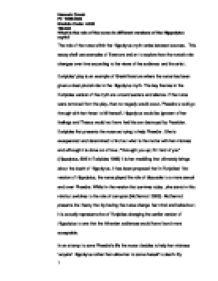 What is the role of the nurse in different versions of the Hippolytus myth?

What is the role of the nurse in different versions of the Hippolytus myth? The role of the nurse within the Hippolytus myth varies between sources. This essay shall use examples of literature and art to explore how the nurse's role changes over time according to the views of the audience and the artist. Euripides' play is an example of Greek literature where the nurse has been given a clear pivotal role in the Hippolytus myth. The key themes in the Euripides version of the myth are around secrets and silence. If the nurse were removed from the play, then no tragedy would occur, Phaedra would go through with her threat to kill herself, Hippolytus would be ignorant of her feelings and Thesus would not have had his son destroyed by Poseidon. Euripides first presents the nurse as trying to help Phaedra. She is exasperated and determined to find out what is the matter with her mistress and although it is done out of love; "I brought you up; I'm fond of you" (Hippolytus, 698 in Euripides 1996) it is her meddling that ultimately brings about the death of Hippolytus. ...read more.

The nurse is an older woman, which would usually suggest someone wise. Phaedra does not appear to be paying attention to her nurse, she is facing away from her, ignoring the advice that she gives Phaedra at the start of the play. Being seated clasping her knees shows us a Phaedra is struggling to resist the desire she feels (Taplin 2007). Aphrodite takes centre stage of the scene representing the influence that the goddesses have over the tragedy. Comparing Euripides' Hippolytus to Seneca's Phaedra we can see both differences and similarities in how the nurse is used. Seneca was written in the Roman period where attitudes were different. Roman society approved of modesty and fidelity, especially in women. When myths were portrayed, women were used to give a clear message of what destruction was caused to households when social barriers were broken down, especially amongst the upper or ruling classes (Budelmann & Huskinson 2011 p.52). Seneca has his nurse emphasize this theme; "people who overindulge themselves amidst too much prosperity and live extravagantly are always looking for something new and unusual" (Phaedra p.112 in Seneca 2011) ...read more.

Both of these versions are referring to the consequences of human actions. Although there are certainly differences between Greek and Roman interpretations of the role of the nurse, the two plays by Euripides and Seneca have, to some degree, used the role of the nurse similarly. They both use her as the catalyst within the story; if she was absent there would be no real tragedy. They differ in their identification of the rationale behind the tragedy; Euripides' nurse points the blame at Aphrodite, whilst Seneca's nurse uses the actions of human's decisions to bring about the tragedy. Both nurses act out of love for their mistress but both become the target of the audiences' blame for the resulting deaths. Euripides also may certainly have used his nurse as a voice for his 'corrections' of his former version of the play. His nurse was also used to shock Greek society by getting Hippolytus, her master, to keep a secret that he dare not reveal. Other cultural materials depicting the myth support the societies' views of their time. They either illustrate the nurse, along with the goddesses and their influences on the characters within the myth or, they show the nurse and Phaedra, indicating a society's view on conspiratorial nature of women and the consequences of their actions. ...read more.