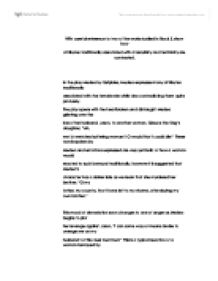 With careful reference to Pygmalion by George Bernard Shaw and Medea by Euripides, show how attributes traditionally associated with masculinity and femininity are contrasted.

With careful reference to two of the works studied in Block 5, show how

attributes traditionally associated with masculinity and femininity are contrasted.

In the play Medea by Euripides, Medea expresses many attributes traditionally

associated with the female role whilst also contradicting them quite profusely.

loss of her husband, Jason, to another woman, Glauce the King’s daughter, “Ah,

me! A wretched suffering woman I! O would that I could die!” These words spoken by

reacted to such betrayal traditionally, however it is suggested that Medea’s

character has a darker side as we learn that she murdered her brother, “O my

father, my country, that I have left to my shame, after slaying my own brother.”

her revenge against Jason, “I can some way or means devise to avenge me on my

We see a more masculine, heroic side to Medea’s character as she warns “Let no

one think of me as humble or weak or passive; let them understand I am of a

different kind: dangerous to my enemies.” Plotting to kill Glauce and her father

Creon, Medea sends her sons to their palace with robes and jewellery laced with

poison as a mock peace gesture. This shows Medea to be a very strong willed

character as she feels no remorse when her plan works. In fact she feels proud

and actually revels in her achievement “Tidings most fair are thine! Henceforth

shalt thou be ranked amongst my friends and benefactors.”

Another traditionally contrasting role is that of Jason. In Athenian society the

most important male values and qualities were those of bravery, personal

honour, competitiveness and power, none of which are displayed by Jason in

Euripides’ play. He is portrayed against tradition and inconsistently with his

reputation as a hero, as a considerably weaker character compared to that of

which Jason explains his reasons for leaving Medea, almost pleading his case,

in by Jason’s excuses. “Away with cowardice! Give not one thought to thy

babes, how dear they are or how thou art their mother.”

It is later that Medea’s ultimate act of revenge is revealed. She shall murder her

sons in order to exert the most pain possible onto Jason. “I will bear off my

children from this land. It never shall be said that I have left. My children

for my foes to trample on.” This act initially may be considered as

atrocious and uncharacteristically feminine, a mother murdering her own

children to get back at her unfaithful husband, but alternatively may be

than have a man like Jason care for them.

When the murders are committed, Medea deprives Jason of his son’s bodies,

instead confronting an inconsolable Jason with the words, “I do not leave my

children's bodies with thee; I take them with me that I may bury them in Hera's

precinct. And for thee, who didst me all that evil, I prophesy an evil doom."

Stripping Jason of any masculinity he may have had.

illustrating those characteristically of women.

Another play showing contrast with attributes traditionally associated with

masculinity and femininity is that of Pygmalion by George Bernard Shaw.

creates. Shaw’s 1913 interpretation of this play maintains a very similar

structure to the myth it is based upon, whereby a man ‘creates’ a lady out of a

common flower girl. However Shaw’s work does not see this man falling in love

with his ‘creation’ and the main characters having very different attributes.

Shaw as an ardent sociologist fought for equality amongst the sexes, believing

men and women were more alike than they were different. Challenging the

ancient myth, Shaw’s Pygmalion shows that women are not necessarily the

Eliza Doolittle gaining confidence, self respect and dignity and ultimately

Pygmalion also shows that the male role is not necessarily dominant, strong or

having ultimate power, rather being less than perfect. In Act One, some of the

flaws of the main male role, Higgins, are revealed by his housekeeper Mrs

Pearce, “You swear a great deal too much.”

become, however it is with the help of Mrs. Pearce working on her manners

can become complete. It is here that the reader learns of Higgins’ negative habits

further for example his constant swearing and lack of manners, causing Mrs

down to breakfast in your dressing-gown...not to eat everything off the same

plate, and to remember not to put the porridge saucepan out of your hand on

the clean tablecloth,” showing the main Pygmalion role is by no means ideal.

he sees her not as a person, but in fact a mere object of scientific experiment.

then, “they might as well be blocks of wood.” Mrs Pearce is then forced again to

criticising Higgins for his harsh words saying, “The matter is, sir, that you can't

take a girl up like that as if you were picking up a pebble on the beach.” Higgins’

his own household, his housekeeper appearing to hold this role.

In Act Three another strong willed and dominant female role is introduced, that

of Mrs Higgins, who reduces Higgins, a so called mature and respectable man, to

that of a young boy, “Stop fidgeting and take your hands out of your pockets.

friends and seems embarrassed by his clumsiness, stumbling into furniture and

his lack of manners and rudeness, “Henry! What are you doing here today?...Go

home at once...You offend all my friends: they stop coming whenever they meet

you.” It is then that Higgins realises there are certain traits within him that will

not change when he tells his mother, "I shall never get into the way of seriously

liking young women: some habits lie too deep to be changed."  This is ironic as

he believes he can do exactly that with Eliza. Alter her every habit in order to

herself, refusing to be treated as an object any longer by reacting surprisingly to

a request made by Higgins, by throwing his slippers at him, “You don't care. I

know you don't care. You wouldn't care if I was dead. I'm nothing to you-not so

much as them slippers.” This is extremely uncharacteristic of a woman who

would not be expected to speak to a man in this way.

This is a pivotal point in the play as, although Higgins is stunned by such

behaviour, he realises how powerful a woman can be and that the way in which

he has treated Eliza has been wrong. For a male character, such as that of

Higgins, to identify his mistakes, is not an attribute traditionally associated with

Following this event, in Act Five Eliza realises that, “the difference between a

lady and a flower girl is not how she behaves, but how she's treated.” This is an

extremely intelligent claim and shows the amazing transformation Eliza has gone through.

Eliza, although grateful for what Higgins had done for her shows great strength

were a servant “you’re nothing but a bully,” by ignoring his order that she must

return to him by stepping out of the door, leaving Higgins alone in the room.