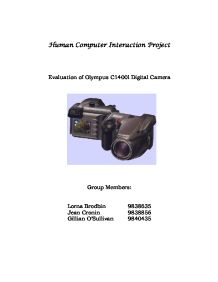 Human Computer Interaction Project Evaluation of Olympus C1400l Digital Camera Group Members: Lorna Brodbin 9838635 Jean Cronin 9838856 Gillian O'Sullivan 9840435 1. Introduction "Every picture tells a story" An old saying that holds true. A picture can tell us more in an instant than a thousand words ever could. A picture records emotions, expressions, feelings and conveys them easily to the onlooker. Photographs capture hundreds of years of history be it on a world scale or at a personal level. We capture our weddings, births, birthdays and other occasions dear to us on camera because we want to hold on to that moment forever. Every time we look at a photograph we remember that day and relive that moment. The camera never lies. It takes a moment in time and freezes it. We rely on photographs as a tool to help us to understand and to remember the history of the world. Most of the worlds great historical events have been captured on film. A photograph of an innocent victim of war makes the victim real, like someone we knew rather than a name in a paper, and touches us far more deeply than stories in a book. Peoples descriptions of events are often tainted by exaggeration, imperfect memories and personal opinions but there is no denying the evidence of a photograph. The camera has come along way since the days of Niepcei. The first cameras were big and bulky, slow and inconvenient. Modern cameras incorporate a wide variety of functions. They are compact and you no longer require any special expertise in order to use one. One of the most revolutionary developments in recent years has been the onset of the digital camera. The digital camera has many advantages over standard cameras. No more messing about loading films or having to finish off a film so you can get it developed. No more waiting for them to be developed only to find out that most of the photographs were ruined or are unrecognizable. ...read more.

"I'm going to press this big button up here." However the camera refused to take a picture straight away (this was due to the autofocus not being properly focused). "I'm pushing it and holding it but nothings happening." Turning on the flash: When asked to turn on the flash the user first looked at the top row of buttons but he didn't think any of them represented the flash. "There's these four buttons here but none of them look like the flash really. I'll bring up the menu thing." He then decided, via a process of elimination, to try the red button. "There's four buttons here and its not the flower button, its not the zigzag. I'm pretty much just picking the red one by default. I have no idea what's going here." The 'red button' turned on the selftimer mode and the user was deceived into thinking that the flash might be working when the selftimer signal starting blinking. "Hey that light was just flashing, maybe that means the flash is ready." When the evaluator explained that this light had nothing to do with the flash the user decided that it was time to try using the manual. He looked in the table of contents and saw mention of the red eye reducing flash and thought that was what was required. "This manual is confusing." When attempting to turn on the red eye flash he mistook the spot metering mode symbol for the red eye symbol. "Is that it? Its got a square around a circle." He tried taking a picture again to see if he had succeeded to turn on the flash. He thought that the flash had actually worked that time and the evaluator had to inform him that this wasn't the case. "Whayhey!! .......what do you mean there was no flash? Really?" The user then tried turning the camera back into play mode to see if he could turn on the flash from there. ...read more.

Conclusions In her debriefing our novice user blamed herself for everything that had gone wrong during her testing. In his book "The Design of Everyday Things"[6], Don Norman discusses this tendency of people to blame themselves. "If we believe that others are able to use the device and if we believe that it is not very complex, then we conclude that any difficulties must be our own fault." However many of the mistakes that were made by our novice user were repeated by all subsequent users proving that the fault lies in the device, not in the user. The Olympus Camedia digital camera is far from perfect. Even the most basic task of all, turning on the camera, proved troublesome. In a review of this camera which appeared in 'PC Magazine UK' and which is included in Appendix F, the author stated that "the only feature of the Olympus C1400L that disappointed us was the automatic focus". Perhaps it would be a good idea if 'us' was extended to include a few actual users of the camera instead of professional, highly experienced reviewers so that people who go ahead and purchase the camera on the magazines recommendation are more accurately informed of some of the problems they are likely to face. Overall we found the cooperative evaluation to be a highly enjoyable and enlightening experience through which we came to appreciate the difficulties involved in, as well as the great importance of, designing usable systems. The thinking aloud method proved to be an extremely effective manner of pointing problems in a devices design and obtaining enough information about the causes of these problems to make suggestions on how they could be overcome. Including an abundance of extra functions in your design is all well and good but if the users can't figure out how to use any of them they degenerate into (as Evan put it in his debriefing) "just random stuff on the side of the box so people will buy yours and not somebody else's." We would like to conclude by thanking all our users for their help and cooperation. 10. ...read more.