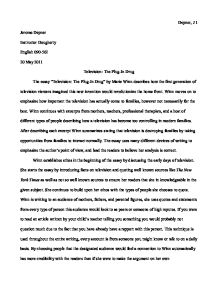 A rhetorical look at &quot;Television The Plug In Drug&quot; by Marie Winn

Depner, J 1 Jerome Depner Instructor Dougherty English 090-56I 20 May 2011 Television: The Plug-In Drug The essay "Television: The Plug-In Drug" by Marie Winn describes how the first generation of television viewers imagined this new invention would revolutionize the home front. Winn moves on to emphasize how important the television has actually come to families, however not necessarily for the best. Winn continues with excerpts from mothers, teachers, professional therapists, and a host of different types of people describing how a television has become too controlling in modern families. After describing each excerpt Winn summarizes stating that television is destroying families by taking opportunities from families to interact normally. The essay uses many different devices of writing to emphasize the author's point of view, and lead the readers to believe her analysis is correct. Winn establishes ethos in the beginning of the essay by discussing the early days of television. She starts the essay by introducing facts on television and quoting well known sources like The New York Times as well as not so well known sources to ensure her readers that she in knowledgeable in the given subject. ...read more.

Winn plays on the parental concerns of readers to give her argument a skeletal structure while filling in the fatty tissues with her own reflections. Winn uses Irony in the paper when she used multiple quotes describing the benefits of televisions in homes from early analysis of the device, although giving the exact opposite opinion of her own. She continues by stating that the people she quoted could never have seen the hazardous change in life style due to the television and twists these quotes to her own advantage. She frames these quotes in such an ironic manner that they become the platform for her jumping off point to begin talking about her own sentiments on the subject. Winn continues the Irony to the end of the essay when quoting the book Television and the Quality of Life by stating that the more time families spend together watching television left those families feeling unchallenged and passively engaged as a whole, and all together less satisfied. (Winn 465) Winn appeals to the pathos of her readers with the argument that television destroys family interactions. ...read more.

It seems that Winn is constantly accusing the parents for how their children have become addicted to television, and in some cases have addicted the parents as well. Winn states that "...the medium's dominant role in the family serves to anesthetize parents into accepting their family's diminished state and prevents them from struggling to regain some of the richness the family once possessed." (465) In most cases the parents are to blame for letting their children be raised by a television, or watching a cumulative of hundreds of thousands of hours of programing just because a child wanted to, however what about the parents who couldn't tell their children to turn off the television because they were at work? Shouldn't the child be held responsible for part of their actions in choosing to watch so much programing? Winn used many Different writing techniques to emphasize her points in the essay, some well-placed others with a bit more routine use. I found the essay a bit too pushy in regards to making the authors point of view stick, however setting aside the author's point of view the article was quite informative and well structured. ...read more.