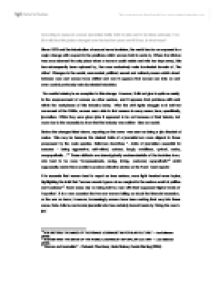 According to research, women journalists battle both for jobs and to be taken seriously. How (if at all) has this picture changed over the last few years and if it has, in what ways?

According to research, women journalists battle both for jobs and to be taken seriously. How (if at all) has this picture changed over the last few years and if it has, in what ways? Since 1975 and the introduction of second wave feminism, the world has been exposed to a major change with respect to the positions which women hold in society. Where the kitchen was once deemed the only place where a woman could reside and wile her days away, this has subsequently been replaced by, the once exclusively male dominated domain of, 'the office'. Changes in the social, economical, political, sexual and cultural powers which stood between men and women have shifted and now it appears that women can take on and even control previously male dominated industries. The media industry is no exception to this change. However, it did not give in quite so easily to the empowerment of women as other sectors, and it appears that problems still exist within the workplaces of this industry today. After the civil rights struggle and anti-war movement of the 1960s, women were able to find careers in many areas, here, specifically, journalism. While they were given jobs it appeared to be not because of their talents, but more due to the necessity to show that the industry was neither bias nor sexist. ...read more.

Women do not have to be scrutinised by their work colleagues or fall victims to the aforementioned problems which occur in the workplace. The internet appears to have become a saviour for female journalists. It gives women the freedom to work from home or abroad with only occasional visits to the office. This means she is able to produce high quality work during their own time and not have to get bogged down with all the 'office politics' or worrying about potential clashes and arguments with her male counterpart. It does however mean that she could miss out on certain information about upcoming news stories and is less likely to be selected for certain reports. The stories which women are 'allowed' to report on majorly affect the relationship between male and female equals. If women are given bigger, more prestigious feeds, they are often criticised as having slept with their bosses or having found another way to manipulate their managers into giving them the air time. It is assumed that women are simply not good enough to report on any 'worthwhile' material. The quote "Women are... judged by their appearance rather than their competence" represent's a fair (albeit unjust) view expressed by men in the news industry. Another way in which the internet has served to help women's struggle in the field of journalism is the means in which it helps women voice their opinions. ...read more.

In the mainstream, women must (for the time being) suffice with delivering consumer based news beats and hope that an equality of stories will feature in the near future and the sexism that currently exists will be discontinued, so they can enhance their careers. It remains to be seen how the tightening of the gender pay gap will affect women in this industry. Perhaps editors will look for reporters with better qualifications and judge them not on their sex but based on their skills. In terms of changes over the last number of years however, it appears that women's position, although it has transformed somewhat (in that, it is more accepting of the sex, even if it does not grant them good beats), a lot more change is desirable. Women need to gain confidence and respect in this industry but this growth comes hand-in-hand with being given better news stories. As the following quote suggests, "...in terms of the important information, the news pages, women are not ordinarily present... News is a man's world."7 - News still belongs very much so, to the man. There appears to be a direct correlation between an incline in women being given jobs in journalism and political movements taking place (whether this be the feminist civil rights struggle in the 1970s or the downfall of the Taliban's anarchist regime). ...read more.