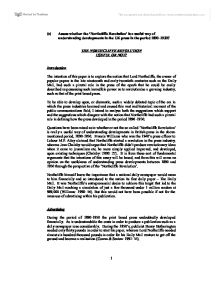 Assess whether the Northcliffe Revolution is a useful way of understanding developments in the UK press in the period 1890-1930?

(a) Assess whether the 'Northcliffe Revolution' is a useful way of understanding developments in the UK press in the period 1890-1930? THE NORTHCLIFFE REVOLUTION USEFUL OR NOT? Introduction The intention of this paper is to explore the notion that Lord Northcliffe, the owner of popular papers in the late nineteenth and early twentieth centuries such as the Daily Mail, had such a pivotal role in the press of the epoch that he could be easily described as possessing such incredible power as to revolutionise a growing industry, such as that of the print based press. To be able to develop upon, or dismantle, such a widely debated topic of the era in which the press industries boomed and caused this vast and historical moment of the public communications field, I intend to analyse both the suggestions which support and the suggestions which disagree with the notion that Northcliffe had such a pivotal role in defining how the press developed in the period 1890-1930. Questions have been raised as to whether or not the so-called 'Northcliffe Revolution' is really a useful way of understanding developments in British press in the above-mentioned period, 1890-1930. Francis Williams who was the 1940's press officer to Labour M.P. Atley claimed that Northcliffe started a revolution in the press industry, whereas Jean Chalaby would argue that Northcliffe didn't produce revolutionary ideas when it came to journalism etc, he more simply applied improved, and developed, upon existing techniques (Chalaby: 2000: 27). It is from these sort of fundamental arguments that the intentions of this essay will be based, and from this will come an opinion on the usefulness of understanding press developments between 1890 and 1930 through the perspective of the 'Northcliffe Revolution'. Northcliffe himself knew the importance that a national daily newspaper would mean to him financially and so introduced to the nation its first daily paper - The Daily Mail. ...read more.

(Pound & Harmsworth: 1959: 46) Debates have been raised as to whether Northcliffe can be extremely useful in looking at the developments of journalism in the period 1890-1930, with both Jean Chalaby and Kevin Williams both believing that although he had an effect he more simply applied adapted, improved and developed existing traditionally placed techniques and styles, simply giving them more direction and purpose (Chalaby: 2000: 27, Williams: 1998: 56). Although with orders from Lord Northcliffe to his journalists to 'touch life at as many points as possible', the press moguls publications reported upon news that he believed reflected new elements of personal and societal life that had never been so widely described upon in the history of the British press. (H.Fyfe, 1930, 86-87) Lord Northcliffe was revolutionary in the fact that he recognised the potential of the female market and so introduced the Daily Mirror, which employed a female only staff, as a newspaper for the 'gentlewoman'. This venture turned out to be a complete failure as the paper simply didn't sell and was revamped into an illustrated daily. This is proof alone that Lord Northcliffe understood the value of the female market as he saw an indication of what could happen in future years. A few decades down the line the advertisers and newspapers realised collectively that there was an untapped goldmine waiting in the wings through this feminine market, as the industry changed the way it reported on news as to make it more 'neutral' and in turn more appealing to both genders. This though is arguably more a factor in terms of the effect that Northcliffe had on the economic revamp to the industry but nonetheless was an important factor in understanding the developments of the industry in terms of journalistic style. People also believe that as the Daily Mail grew it began articulating popular causes that came to represent suburban, lower middle classes and effectively came to speak for their views and values - "imperialism, jingoism, nationalism" (Jeffery & McCelland: 1987: 9-27). ...read more.

This period was definitely the era of the Press Baron. Whereas previously the proprietors of the national dailies had had an influence editorially, there had never been such a blur of the line that separates the owner from the day-to-day editorial decision making of a publication. Northcliffe was the main owner to do this, and it was his interference that often changed the whole point of view for news stories. Also the continual crusading of his newspapers often resulted in governmental reform, none more so at time of war. It is obvious that the press barons had political influence through their connection with the masses, but it is debatable whether they used this power in a detrimental fashion. It was this desire and power to increase circulation and voice his own beliefs that is so important to the development of the press in the period 1890-1930, as it showed the great power that the press had, and could continue to have, over the masses Conclusion In conclusion it is my opinion that the 'Northcliffe Revolution' is a justified angle to proceed from if there is a need to understand the developments of the British press in the period 1890-1930. Northcliffe's contribution to the history of the press is not one of journalistic nature. He was the master of forward thinking. His greatest contribution to the press of his period was to finally modernize it economically. He didn't radically reform journalism; he more simply adapted it to fit in with his designs of a contemporary press industry. Jean Chalaby (Chalaby: 2000: 28) defined his influence well when she described Northcliffe's contribution as being one that; "...is not as a journalist but as a press owner who had an extraordinary understanding of the implications of journalism for the daily press. He applied and developed journalistic practices more than he invented them. He brought the daily newspaper into the 20th century and modernised journalism in the process... ...read more.