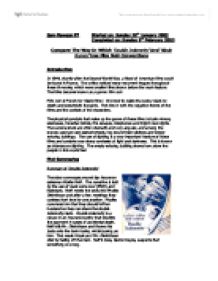 Compare The Way In Which 'Double Indemnity' And 'Blade Runner' Use Film Noir Conventions.

Sam Rawson E7 Started on: Sunday 26th January 2003 Completed on: Sunday 9th February 2003 Compare The Way In Which 'Double Indemnity' And 'Blade Runner' Use Film Noir Conventions Introduction In 1944, shortly after the Second World War, a flood of American films could be found in France. The critics noticed many recurrent images throughout these B-movies, which were smaller films shown before the main feature. The films became known as a genre: film noir. Film noir is French for 'black films'. We tend to relate the colour black to death and pessimistic thoughts. This ties in with the negative theme of the films and the outlook of the characters. The physical symbols that make up the genre of these films include mirrors, staircases, Venetian blinds, fire escapes, telephones and bright neon lights. The camera shots are often dramatic and very angular, and among the scenes used are rain-lashed streets, fog-bound train stations and empty echoing buildings. The use of lighting is a very important feature of these films and contains very sharp contrasts of light and darkness. This is known as chiaroscuro lighting. The empty echoing building shows how alone the people in this world feel Plot Summaries Summary of 'Double Indemnity' The story converges around top insurance salesman Walter Neff. The narrative is told by the use of male voice over (MVO) and flashback. Neff meets the seductive Phyliss Dietrichson and after a few meetings they confess their love for one another. Phyliss convinces him that they should kill her husband so they can share the double indemnity claim. Double indemnity is a clause in an insurance policy that doubles the payment in cases of accidental death. Neff kills Mr. Dietrichson and throws his body onto the train tracks, whilst posing as him. This made it look as if Mr. Dietrichson died by falling off the train. Neff's boss, Barton Keyes, suspects that something is wrong. ...read more.

After the war, a lot of money had been lost and those that were wealthy stayed wealthy. Phyliss Dietrichson comes across as well off in her mansion of a residence and expensive clothes, and yet she wants more money. This depicts her as very materialistic as she already has more than most but still wants more. Neff seems to actually need the money, as his small apartment is not well furnished and he seems to have to work quite hard to earn the small amount of money he receives. Phyliss has had to endure no such labour and is just living off her husband's earnings. 'Blade Runner' symbolises how lack of emotion can leave us isolated from one another. In this futuristic and impersonal world it is the replicants that are built without emotion that show emotion the most. Deckert leads a lonely and somewhat unhappy life, and only at the end when he and Rachel leave together does he seem remotely happy. He leaves the lonely existence of the chaotic city and finally has his freedom. Physical Symbols The physical symbols in film noir are, in my opinion, the most important aspects of the films. They show how the character is feeling or how good/evil they are. In 'Double Indemnity' when Phyliss and Neff meet for the first time, she looks in a mirror and brushes her hair. Brushing her hair lets the audience see how vain and selfish she is. We can tell this because she is not even looking at Walter, she is just focusing on her appearance. The mirror allows the audience to know early on that she is two-faced. If Walter looked at her, he would only see one face and the back of her head. This represents him only seeing one side of her and realising in the end that there are two sides of her, and neither of them ever really loved him. ...read more.

The unicorn is a mythical creature, and is placed near Deckert's photographs on his piano. This could be telling the audience that like the unicorn, Deckert's memories are a myth. Deckert: I don't work here anymore. Give it to Holden, he's good. Bryant: I did. He can breathe okay as long as nobody unplugs him. He's not good enough, not as good as you. I need you, Deck. This is a bad one, the worst yet. I need the old blade runner, I need your magic. This paragraph talks about an 'old blade runner'. My theory is that Holden's memories have been implanted into Deckert a couple of weeks before our story starts. Maybe Holden is not as good as Deckert because he is not a replicant with super-human strengths. Deckert also talks about how he used to be a blade runner right at the start, but he is very vague. Maybe this is because he knows deep down that he is a replicant, or maybe he just cannot remember. Rachel: You know that test of yours? Did you ever take that test yourself? This quote suggests that Rachel has her suspicions about Deckert being a replicant. I believe that an ending that confirmed this would have made the film a lot better. Not that it could be much better than it already is. And The Winner Is ... It has taken me a great length of time to decide which film I prefer. There are aspects of both films that I like, and aspects that I do not. But, overall, I slightly prefer 'Blade Runner'. It has made more of a lasting impression on me and is altogether more memorable. For me to enjoy a science fiction film (as I hate them) it has to be a really good film, and 'Blade Runner' was. Even though I slightly prefer 'Blade Runner', I would still give 'Double Indemnity' ten out of ten for being one of the best films I have ever seen. ...read more.

This is not a legitimate conclusion to the essay, based upon its title. what is required is a brief precis of the manner in which the two films either conform to or subvert the codes and conventions of the genre.

Equally, the speculation upon whether Deckard is a replicant is irrelevant, unless you want to tie it into a discussion of masculine stereotypes in film noir (in which case it becomes very interesting indeed!)

Finally, the sub-headings that are used to structure the essay are not necessary. I actually think that the structure itself is very good as a result of the logical progression imposed by those headings, but it would still have been so if they'd been removed. A better solution is to tell the reader right at the beginning of the essay: I will analyse the male and female characters and compare them to the stereotypes expected in the genre, and look briefly at the aesthetic and symbolic content of elements of the mise en scene, including the use of lighting and design to create mood, meaning and character...

There is some excellent research and some intelligent reflection throughout the essay, and there is even the beginning of a critical appraisal of the ideological schemata of the genre e.g. you've noticed how misogynistic and pessimistic is the world-view it presents.