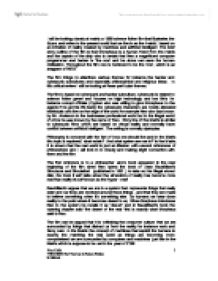 I will be looking closely at matrix a 1999 science fiction film that illustrates the future, and refers to the present world that we live in as the 'matrix', based on an imitation of reality created by machines and artificial intelligent. The brief story outline of the film is that Morepheus is a human freed from the matrix and the captain of the ship who is certain that Neo a magnificent computer programmer and hacker is 'the one' and he alone can save the human civilisation. Throughout the film neo is believed to be the 'one', which is an anagram of 'NEO'. The film brings to attentions various themes for instance the hacker and cyberpunk subcultures and especially philosophical and religious ideas. In this critical review I will be looking at these particular themes. The film is based on cyberpunk and hacker subculture, cyberpunk is related to science fiction genre and focuses on high technology and low life's for instance corrupt officials (Cypher who was willing to give Morepheus to the agents if he got his life back) the cyberpunk characters are mostly alienated individuals who live on the edge of the world for example Neo who was known by Mr. Anderson in the businesses professional world but in the illegal world of crime he was known by the name of Neo. Story line of the Matrix is similar to cyberpunk films which are based on virtual reality and normally have conflict between artificial intelligent. ...read more.

Another philosopher who is referenced in the film; Rene Descartes with the popular sayingof 'I think, there fore I am' this phrase is also recited in the film, Ren� Descartes theory is also illustrates in the film as Neo questions the world, like Ren� who poses the question how are we certain that the world that we live in is not just an illusion and strained upon him by an evil spirits (Matrix). Neo's character sort of is similar to Plato's allegory of the cave where in this book he explores the idea of the real world being an illusion, he talks about this cave where people are kept prisoners since they were born and know nothing better then what they were taught until one day this one person comes out of the system and realises something and goes back to the cave to convince the others about his findings. Just like in the Matrix, where the finder of the matrix realises something spectacular and goes back to the real world to tell the others And finally when Neo discovers the hidden truth he finds it his duty to save humanity from this ignorance and acceptance of false reality. The religious theme that is linked to this film is the 'city', in the film the city is talked about but not seen the parallel connection to this is the land that was promised by god to the Jews. ...read more.

Matrix is the fate, and it shows the fate as an organised and pre-constructed world where everything has a consequence and the choice that we get in the real world is just an illusion, we are told that we have free speech but its free speech until it does not effect the government. In the real world the humans have a choice to take action and make mistakes the red pill, which represents real life when Neo chooses the red pill he realises that the world is a messed up place and Cypher who is one of the characters in the film even regrets taking the freewill option he claimed life was better when everything was decided for you. In conclusion the matrix is about how technology is becoming more advanced then us that they are becoming more humanlike and have similar qualities as us, that its starting to be used against us, man made machine for its own purpose but it all went out of control to the point where the characters in the Matrix are machinelike as well as their fighting skills and superhuman strength and the use of programmes that were downloaded in them to give them the result of liquid movement. The technology has reached to a point where it is using us, because humans turn to these artificial intelligent for help. In the film we realise that machines and humans are mutually dependent, as machines need humans to determine their existence and humans need machines as self defence. ...read more.