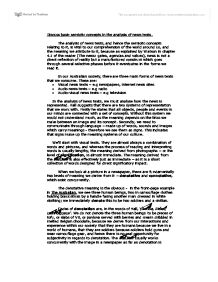 Discuss basic semiotic concepts in the analysis of news texts.

Discuss basic semiotic concepts in the analysis of news texts. The analysis of news texts, and hence the semiotic concepts relating to it, is vital to our comprehension of the world around us, and the meaning we attribute to it, because as explained by Watson in chapter 4.1 of the reader (The news: gates, agendas and values), news is not a direct reflection of reality but a manufactured construct which goes through several selective phases before it eventuates in the forms we read it. In our Australian society, there are three main forms of news texts that we consume. These are: * Visual news texts - e.g newspapers, internet news sites * Audio news texts - e.g radio * Audio-visual news texts - e.g television In the analysis of news texts, we must analyse how the news is represented. Hall suggests that there are two systems of representation that we work with. Firstly he states that all objects, people and events in our minds are connected with a set of concepts. Without this system we would not understand much, as the meaning depends on the links we make between an image and its concept. ...read more.

Codes of connotation, on the other hand, are the more subtle implied-meanings that are attached, and hence open-ended, which have the potential for various interpretations by people from different cultural and socio-economic backgrounds. A headline is often heavily connotation-orientated, and the headline 'Anzac spirit patrols dark streets of Baghdad' illustrates this. 'Anzac spirit' could be interpreted to mean an actual dead spirit of an Anzac soldier, or an alcoholic spirit made through the fermentation of Anzac cookies, but instead we would generally accept its connotations to be 'the Australian army'. This is in no way denoted and obvious, but it is still interpreted the way the journalist/editor intended by the majority of its audience, in part because it complements the image. Besides its obvious denotation, the connotations attached to a news image are immensely important. To inexperienced newspaper readers, an image will have connotations attached to it, which the reader will clearly be able to perceive, and yet have no awareness of what it is creating these connotations. These connotations, whether positive or negative, are often created by such elements as gestures, colour, balance, positioning of people and objects within the frame, camera angles, and indeed the selection of the visual accompaniment to a story. ...read more.

But is that time line now being extended?" (critical, seemingly rhetorical open ended questions) "Well, dawn has broken over Baghdad, welcoming day one of the new freedom, but if this is liberty, then it's far from perfect." (negative tone, implying but not stating) We call the component which creates the connotation (ie, the balance of a frame) the signifier and the connotation attached to it (ie, power and authority) the signified. These are the two major elements of signification. There are two further aspects that we need to distinguish in the signification of news texts - these are the news value and the ideological level of the photographic sign. In the words of Hall, news value is 'elaboration of the story (photo + text) in terms of the professional ideology of news' - basically what actually constitutes news in the newspaper discourse (examples: action, recency, newsworthiness) Ideological level, on the other hand, is relating to the story's connotations and interpretations, and belongs to society's moral-political discourse. It is 'both the interpretation which a photo/text specifies, and the general ambience within which the general ideological discourse is itself carried on'. Although it may not be able to create an ideology, it can enhance, locate, or specify the ideological theme. ...read more.