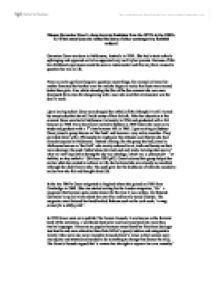 Discuss Germaine Greer's views towards feminism from the 1970's to the 1990's.

Discuss Germaine Greer's views towards feminism from the 1970's to the 1990's. To What extent does she reflect the ideas of other contemporary feminist writers? Germaine Greer was born in Melbourne, Australia in 1939. She had a strict catholic upbringing and appeared not to be supported very well by her parents. Because of this her childhood experiences could be seen as instrumental and this may have caused to question her role in life. From an early age Greer began to question many things, for example at home her mother favoured her brother over her and she began to notice that boys were treated better than girls. Also whilst attending the Star of the Sea convent she was once dismissed from class for disagreeing with a nun who said that communism was the devil's work. Upon leaving school Greer soon dropped her catholic faith although it is still viewed by many today that she still holds many of their beliefs. After her education at the convent Greer enrolled at Melbourne University in 1956 and graduated with a BA honours in 1958. From here Greer moved to Sydney in 1959 where she went on to study and graduate with a 1st class honours MA in 1963. Upon arriving in Sydney Greer joined a group known as 'the Push' and became a very active member. They provided Greer with a Philosophy to emphasize the attitudes and lifestyle she had already acquired in Melbourne. ...read more.

and what the IUD does is once the egg has become fertilised and tries to implant itself into the womb the IUD stops this from occurring. 'People who might be exasperated by the humbug of disguising the real nature of IUD's, suspicious of the blurring of logic in such arguments, more respectful of their own bodies than to bury abortionist's tools in them, are also unreasonable and to be ridden over, smooth-shod.' (Greer:1984:p172). Greer also holds radical views on nature, the differences between the sexes, and science. She refers to the 'dogmatism of science' a theory adopted by feminists during the eighties, which specifies that modern science, maths, philosophy and logic were developed by males, and that they were oppressive and so they need to be re-placed by feminist forms of science. They also believed that nature, the human body and society are infinitely plastic, in that they can be easily changed. In her arguments regarding the differences between the sexes, Greer implies that if women only exercised as much as men do then they would develop equally big muscles! Although during this research Greer only looked upon Ann Oakley who claims than in societies where the labour is more physical and intensive and where women do the heavy work and men do not, she exclaimed that there is almost no difference between the physique of men and women. From this Greer extended her views of the physical (as infinitely plastic) ...read more.

Professor Catharine Lumby at Sydney university who conducted this research also found that when talking to young women about the media they consume, young women are 'not value-free or brainwashed. In fact, they're very aware that people see them that way and they resent the assumptions'. It's seems a real shame that someone like Germaine Greer and her status would rely on stereotypical generalisations about today's young women and the culture they endure. 'If younger women are expected to find feminism relevant, then all feminists need to show they are open to understanding the lives young women live and the culture they embrace.' Even though Greer has been heavily criticised because she was so popular with the press she was able to questions things from rape to abortion, from marriage to employment, from harassment to discriminations, because of her and other second wave feminists they have helped changed the society young women now enter by getting laws enforced to stop women becoming degraded. Women today now have much more power in society and a full menu of legal options to redress fundamental wrongs due to feminists like Germaine Greer. In Christine Wallace's autobiography of Germaine Greer (the untamed shrew) she believes that throughout Greer's life it has been tough for her but she has remained strong and learnt from her experiences which has made her who she is and why she is that way. '.....She has been an inspiration to so many other women. She has never surrended her sovereignty. Germaine Greer was never tamed. ...read more.