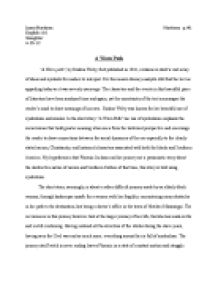 ﻿Jason Martinez Martinez p. #1 English 102 Slaughter 6-25-12 A Worn Path ?A Worn path?, by Eudora Welty, first published in 1941, contains in itself a vast array of ideas and symbols for readers to interpret. For this reason literary analysts still find the text as appealing today as it was seventy years ago. The characters and the events in this beautiful piece of literature have been analyzed time and again, yet the uncertainty of the text encourages the reader?s mind to draw meanings of his own. Eudora Welty was known for her beautiful use of symbolism and similes. In the short story ?A Worn Path? her use of symbolism emphasis the social issues that hold greater meaning when seen from the historical perspective and encourage the reader to draw connections between the social dynamics of the era especially to the clearly stated racism, Christianity, and historical characters associated with both the blacks and Southern America. My hypothesis is that Phoenix Jackson and her journey are a pessimistic story about the destructive nature of racism and Southern Culture of that time, this story is told using symbolism. The short story, seemingly, is about a rather difficult journey made by an elderly black woman, through landscapes unsafe for a women with her fragility, encountering many obstacles in her path to the destination; last being a doctor?s office in the town of Natchez Mississippi. ...read more.

The fact that she had seen it all had given her a very driven spirit, strength, and courage that usually leaves people in the final stages of their life. On numerous occasions throughout her journey she exhibited these qualities, whether it was in the form of command over the wild creatures, the woods, the perseverance climbing uphill, the patience detangling herself from the Jason Martinez Martinez p. #4 English 102 Slaughter 6-25-12 thorns, the courage crossing the log over the creek, or the resistance from hopelessness even after falling down into the ditch. When the white huntsman who had helped her out of the ditch pointed a gun at her to see if she would despair, she stood calm and dignified, and exclaimed she had seen many die for no crime, so she wasn?t afraid. Many critics agree to the point that the name Phoenix itself is symbolic, of the bird that rises from the ashes as a symbol of rebirth. Another symbolism that analysts have drawn from the context around her is that of the mistletoe ?representing immortality? (Piwinski 1) under which she rests after crossing the creek, defining the overcoming of all hurdles as well as encompassing the selfless love and compassion for her grandson. However it is clear from her increasing loss of senses and easily delirious mind that her strength is slowly failing her and it won?t be long when such a treacherous journey as she takes on regularly, might bring an end to her. ...read more.

Their charity was a duty, their celebration cold to any feeling, unable to see beyond skin color none of them feel anything for Phoenix, an old women in the cold, with hardly enough clothing to keep her warm, embarking on a journey that could well take her life someday. The only compassion and sensitivity we see throughout the story is that of the old woman towards her grandson, the same love that keeps her intent on continuing her journey, making it frequently ?just as regular as clockwork? as the nurse tells us, despite her own growing weakness and loss of faculties. ?We is the only two left in the world? apparently describes their having no one but themselves, but is interpreted as the only two characters that care about each other by Bethea. The symbolism incorporated in the short story combines a long and oppressive history, a struggling present, and future full of disparity for Phoenix and her grandson. The themes point out the heartlessness of society, the discrimination on the basis of color, which Christianity had long ago called off, and the superficial celebration of religious events that symbolize so much more. The irony of the journey that is implanted into the history and the society of the story give it all a deeper meaning. These beautiful meanings revealed by use of symbols in this piece of Jason Martinez Martinez p. #7 English 102 Slaughter 6-25-12 literature will leave its journey resurrecting for many years to come giving Phoenix and ?A Worn Path? well earned immortality. Jason Martinez Martinez p. ...read more.