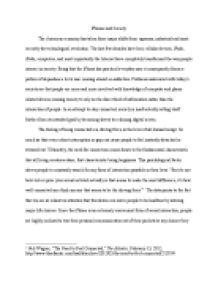 Iphones and Society - misconstrued messages in a connected world.

﻿IPhones and Society The American economy has taken three major shifts from: agrarian, industrial and most recently the technological revolution. The last few decades have lent, cellular devices, iPads, iPods, computers, and most importantly the Internet have completely transformed the way people interact in society. Being that the iPhone has practical everyday uses it consequently forms a pattern of dependence to its user causing almost an addiction. Problems associated with today?s society are that people are more and more involved with knowledge of computer and phone related devices causing society to rely on the direct feed of information rather than the interaction of people. In an attempt to stay connected, society is inadvertently setting itself further from its intended goal by becoming slaves to a shining digital screen. The feeling of being connected is a driving force in the lives of all human beings. So much so that even a short interruption or gap can cause people to feel instantly detached or stressed out. Ultimately, the need for connection comes down to the fundamental characteristic that all living creatures share, that characteristic being happiness. ...read more.

First, studies have shown that a ?substantial amount of communication is non-verbal[2]? (facial expressions, gestures, eye contact, posture, and tone of voice). When one communicates through means of technology such as cellular devices, they may be considerably limiting the amount of information that is sent or received. Colloquialisms such as sarcasm, tone and other variations of informal conversation typically used in face-to-face dialogue also fall by the wayside when words are communicated on the screen. Studies from the Journal of Personality and Social Psychology show that while the sender of a text message may think it is clear, ?50 percent[3]? of the time the message is actually comprehended improperly. Causing people to often be confused or upset with the sender of the message. A large problem that is associated with misconstrued messages in today?s society is indirect or accidental bullying. This miscommunication often carries out in schools or the workplace where common conversation can be awkward even unwelcoming for some. Especially common amongst young teens and adults, which their posts or pictures uploaded to social media sites can cause various unintended problems to those who are subjected in the post due to misinterpretation. ...read more.

The inability to complete basic tasks such as spending quality time with the ones whom they love, and showing their respect to God is a huge eye opener. Cellular phones have become one of the largest addictions that our society faces today. Users have become encompassed in a proxy world in which they value ?likes? over genuine accomplishments, forming a society not keen to value topics of importance. Whether society welcomes it or not, innovation is only bound by the constraints of time and the effects are sure to shape each of our paths. However, the form in which society uses technology will shape the personalities of each respective user. Smartphones provide inherent benefits but their ability to distract people away from each other needs to be discussed. People often turn to their phones as a sense of confidence in order to shy away from a genuine interaction and this its vice. As responsible users it is imperative to try and break away from these habits in order to stimulate better communication, forming a more engaging society. ________________ [1] Neil Wagner, ?The Need to Feel Connected,? The Atlantic, February 13, 2012, http://www.theatlantic.com/health/archive/2012/02/the-need-to-feel-connected/252924/ [2] Takashi Nakamura, ?Computers in Human Behavior? Faculty of Humanities, November 19 2014,http://linksource.ebsco.com/FullText.aspx?linkout=http%3a%2f%2fwww.sciencedirect. ...read more.