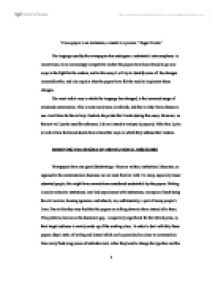 Media - &quot;A newspaper is an institution, a reader is a person.&quot;

"A newspaper is an institution, a reader is a person." Roger Fowler1 The language used by the newspapers has undergone a substantial metamorphosis in recent times. In an increasingly competitive market the papers have been forced to go new ways in the fight for the readers, and in this essay I will try to identify some of the changes incurred by this, and also explain why the papers have felt the need to implement these changes. The most visible way in which the language has changed, is the increased usage of simulated conversation. This is most easily seen in tabloids, and that is why I have chosen to use a text from the Sun to help illustrate the points that I make during this essay. However, as this text will just be used for reference, I do not intend to analyse it properly. After that, I plan to look at how the broad-sheets have altered the ways in which they address their readers. REMOVING THE STIGMA OF INSTITUTIONAL DISCOURSE Newspapers have one great disadvantage : they are written, institutional discourse, as opposed to the conversational discourse we are most familiar with. To many, especially lesser educated people, this might have connotations considered undesirable by the papers. Writing is easily related to institutions, and bad experiences with institutions, examples of such being the civil service, housing agencies, and schools, are, unfortunately, a part of many people's lives. ...read more.

This is why articles in broad-sheets can have long pieces of unbroken text, and refrain from using words suggesting dialogue. However, due to the augmented competition in an ever diminishing market, the broad-sheets are increasingly being forced to follow the tabloids' lead in the quest for easier-to-read pieces. As the papers put on more and more weight, more material is needed to fill the space, and this has led to an explosion in the usage of commentaries, features, and 'small funny pieces'. The Guardian has, through the work of Ian Mayes, pioneered the "readers' editor"9. Instead of hiding away their retractions, they have chosen to employ a corrector whose first loyalty is to the readers. The result of this is a humorous column, a recently published book, and increased trust in the paper itself. This all came in to place after a realisation by Alan Rusbridger, the editor of the Guardian : "Do other editors really believe that their readers will trust them less if they keep admitting they got things wrong? Can't they see that the reverse is true, and that readers will trust them more? The interactivity of the net makes it inevitable that younger readers will expect a relationship with their paper that is closer to a dialogue than a sermon. A readers' editor is a modest start."10 New technology has had quite a strong impact on the newspapers, and the results of this are interesting. ...read more.

The harsh critique inflicted upon him in the papers does not only come from the right, but also, increasingly, from the left.12 This is a reflection of a society where party-allegiance is a thing of the past, and where most people have given up newspaper-subscription in order to have the ability to chose a different paper on different days. The main reasons as to why the papers have changed so much, is the fact that they are responding to changes in our society. We have become more erratic in our interests and behaviour, we have less respect for authority, and we are no longer satisfied with being informed, we want to be entertained. If the papers want to keep the influence that they have enjoyed in this country, they have to pretend to give op their position of authority, and give people what they want to read: easy, conversational material. In this way, we get the press we think we want. 1 Fowler: Language in the news, page: 59 2 Fowler: Language in the news, page:37 3 Lecture notes week 7 4 Stuart Hall: dossier, page:43 5 Lecture week 7 6 Aspects of the French language lecture week 10, by Marie-N�el Guillot 7 Halliday, quoted in Fowler, Language in the News, page: 62 8 Fowler, Language in the News, page: 62 9 Rusbridger, Diary, New Statesman, 4.12.2000, page7 10 Rusbridger, Diary, New Statesman, 4.12.2000, page7 11 Pass notes no: 1780 G2 12.12.2000 12 John Lloyd, Conviction journalists, New Statesman page 23-24 2 10 ...read more.