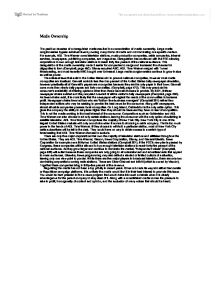 Media Ownership The past two decades of a deregulated media resulted in a concentration of media ownership. Large media conglomerates bypass anti-trust laws by owning many forms of media and not dominating one specific medium. For example, AOL Time Warner owns television stations, music production companies, cable companies, internet services, newspapers, publishing companies, and magazines. Deregulation has continued with the FCC allowing corporations to own enough television stations to reach forty five percent of the national audience. This deregulation of the media ownership made it easier for companies to merge and increased the chances for oligopolies to form (Campbell, page 450). Disney acquired ABC, AOL Time Warner merged with Turner Broadcasting, and most recently NBC bought over Universal. Large media conglomerates continue to grow in size as well as power. ...read more.

Along with newspapers, almost all cable companies possess local monopolies. On Long Island, Cablevision is the only cable option. This gives the company the ability to set prices higher than they should be because they have no fear of competition. This is not the media working in the best interest of the consumer. Corporations such as Cablevision and AOL Time Warner can also choose to air only certain stations, leaving the consumer with the only option of switching to satellite television. AOL Time Warner monopolizes the majority of New York City. New York City is one of the largest United States markets with only one choice when it comes to choosing a cable company. That is too much power in the hands of AOL Time Warner. ...read more.

Likewise, News programming may also reflect a slanted or limited outlook of a situation, leaving only one view point to ponder. While there are five major players in broadcast television, there are only two dominating corporations owning radio stations. These are Clear Channel and Infiniti (which is owned by Viacom). Together these companies bring in thirty-five percent of the revenue. Regulating the media has not been a top priority in recent years. It has not made its way into either Democratic or Republican campaign platforms. It is unlikely the media would find it in their best interest to promote this issue. You would be hard pressed to find a news program that would delve into such a debate when it is clearly advantageous for the parent company to stay clear of it. Along with a consolidated media comes the pressure to rake in profit, homogeneity of content and opinion, and the exclusion of many voices that should be heard. ...read more.