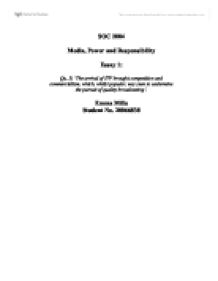 SOC 2004 Media, Power and Responsibility Essay 1: Qu. 3) 'The arrival of ITV brought competition and commercialism, which, whilst popular, was seen to undermine the pursuit of quality broadcasting'. Emma Mills Student No. 20066838 The aim of this essay is to assess how the arrival of the Independent Television (ITV) service affected the broadcasting industry, and whether the resulting competition with the BBC (British Broadcasting Corporation), and the commercialism caused by the new channel undermined the future quality of the British broadcasting service. The essay will look at the original concept of public service broadcasting and what its aims and values were. The essay will then review initial ideas for an independent channel, viewing both arguments for and against the concept. The essay will also discuss how ITV emerged, looking at the authority and regulations governing it, how it became popular with audiences, and the role of advertisers within the service. Following this the essay looks at how ITV's competition caused the demise of the BBC's monopoly within the broadcasting industry, and whether this ultimately resulted in a lack of quality in the subsequent service offered. For the first thirty years the British broadcasting service was the BBC, they formed a monopoly and produced all broadcasting out put, headed up by John Reith, the BBC strived to offer quality broadcasting to a mass audience. ...read more.

The government wanted commercial television to be part of the public service system from the beginning; they set up a public corporation, the Independent Television Authority (ITA) to be chaired by Sir Kenneth Clark. The ITA was given 'general responsibilities to establish a commercial television service that would inform, educate and entertain' (Buscombe 51). The government gave the ITA strict guidelines, insisting that programmes were of a high quality, that films and telefilms were mainly British, and that advertising should not be so great that it detracts from the value of the programmes. The ITA allocated regional franchises to various contractor companies who made programmes, this regionalisation concept related back to The Beveridge report's concerns about 'Londonization' (Crisell 82) and the BBC. The ITA wanted contractors to produce programmes of 'balance, quality, and variety (Crisell 90), they also controlled the quality of the advertising on the channel. There was to be no sponsorship allowed on ITV the contractors were told to use 'slot advertising' (another Beveridge report ideal), selling different slots that were situated between and within programmes to advertisers. The idea was that advertising would be completely separated from the programme's content, thus preventing commercial interference, unlike America where advertisers could provide or participate in the development of programs. ...read more.

chose to offer. It is hard for this essay to solely conclude that the emergence of ITV resulted in a reduction of quality in broadcasting service, the original concept for the service was moulded on the BBC, and the government wanted it to an extension not an alternative to public service broadcasting. The ITA was employed to regulate the service with an agenda to provide good quality programmes. ITV's development of news presentation through ITN was innovative and pioneering, forcing the BBC to rethink their service. However that said, due to advertising pressure for profit ITV focused on its entertainment shows, which were highly popular if not very informative. Due to their popularity the BBC were forced to fight for audience ratings to hold their licence fee, so they too would have to favour more entertainment aspects of broadcasting, although they did produce some of their finest comedies at this time. To determine the effects of these shifts in broadcasting the notion of 'quality broadcasting' would have to be questioned, how can this be measured, popularity? education? If the public were happy with the service then should they be censored into viewing informative programmes over their enjoyment of entertaining shows. ...read more.