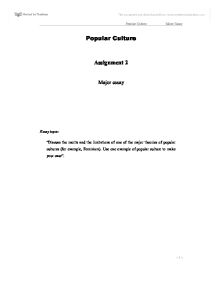 Merits and Limitations of Feminism in Advertisements

Popular Culture Assignment 2 Major essay Essay topic: "Discuss the merits and the limitations of one of the major theories of popular cultures (for example, Feminism). Use one example of popular culture to make your case". This essay is to establish an analytical discussion of both the merits and the limitations of feminism in the chosen scenario of advertising. Owing to the sophistication of the theories and advertising context, the essay will intermingle both the good values and the drawbacks of feminism theorical agenda with examples to illustrate the case. The popular culture has a deep impact on the society and social structure. As explained by Strinati (2004), in the modern setting, popular culture is the culture commercially manufactured by a few for the consumption by the masses. The mass media, which includes print, television, movies and music, usually, portray the society in the way that people manufacturing these products interpret the society. These people are also concerned with the commercial success of their product and so must present a culture which they believe will be accepted by the widest audience. In the process, the popular culture often ends up stereotyping people because it is easier to portray women, minorities and foreigners as stereotypes. This stereotyping becomes even more pronounced in advertisements since the advertisements are a form of popular culture which must sell a product in an extremely limited time and space. ...read more.

This is especially true when selling beauty products. Women in these commercials must be perfect and free of blemish. They are also tall and thin and portray an ideal feminine image. Since these beauty product ads are targeted at women, they represent an ideal feminine figure which the women are expected to aspire for. These images are not real and even the models do not look off-camera the way they do in the commercials, resulting in a feeling of inferiority among women since they have to live up to an extremely high ideal. It must be noted that these perfect images of women in media also raise the male expectations from women resulting in further confirmation of these gender stereotypes. While women may no longer be depicted as the 'stupid housewives' and even though more and more women are shown as professionals, they continue to be objectified. While objectification of women is present in all kinds of advertisements, including those that are geared towards men, the worse form of objectification is in advertisements which are targeted to the female audience. As mentioned above, beauty product commercials are one such advertisement category geared towards women which resort to female objectification to sell products. Yet another product category is lingerie. The irony of lingerie advertisements is that in the pre-feminism era, advertisements displaying semi-nude female body were considered offensive but in the post-feminism era, such semi-naked female body is considered to show 'the sexual power of women over men' (Amy-Chinn, 2006, p. ...read more.

Despite this radical shift in the representation of women in advertisements, they continue to be stereotyped. This stereotyping has now shifted from the social roles of women to the objectification of the female body. While the earlier stereotyping of gender roles was harmful from the feminist perspective, the current objectification of the female body is actually being encouraged by feminists since it is supposed to reflect the female sexual power over men. But the objectification comes with its own set of issues, the biggest being that it undermines women's image of their bodies. The inherent limitations of feminism have been unable to address this issue and the contemporary depiction of women in popular culture continues to objectify the female body. Since popular culture is already reflecting the social realities, it has apparently satisfied the feminist ideal. But the current depiction of women in popular culture, especially advertisements, is far from ideal and feminism is unable to provide answers to these problems. In conclusion, it claims that feminism movements have brought up some revolutional progresses toward women's rights and the way mass media, particularly advertising industry, is trying to percieve and portray them. It has shown that there have been some merits of feminism the adverts conducted in nowadays global society, but apparently the limitations of the feminist agenda still remain there as evidences have been provided and discussed in the paper. ...read more.