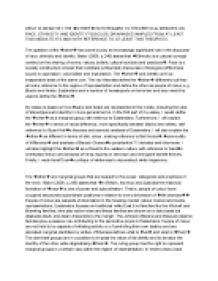 My essay is based on how Blacks and Arabs are represented in the media, including the idea of stereotypes and identity in more general terms. In the first part of my essay, I would define the

WHAT IS MEANT BY THE ?OTHER? WITH REGARD TO THEORETICAL DEBATES ON RACE, ETHNICITY AND IDENTITY? DISCUSS, DRAWING EXAMPLES FROM AT LEAST TWO MEDIA TEXTS AND WITH REFERENCE TO AT LEAST TWO THEORISTS. The question of the ?other? has come to play an increasingly significant role in the discourse of race, ethnicity and identity. Baker (2008, p.248) states that ?Ethnicity is a cultural concept centred on the sharing of norms, values, beliefs, cultural symbols and practices?. Race is a socially constructed concept that mobilises (unfounded) discourses of biological differences bound to oppression, colonialism and exploitation. The ?other? and identity are two inseperable sides of the same coin. The key theorists define the ?other? differently but they all make reference to the regime of representation and define the other as people of colour e.g. Blacks and Arabs. Eastenders and a number of newsreports on terrorism and race would be used to define the ?other? My essay is based on how Blacks and Arabs are represented in the media, including the idea of stereotypes and identity in more general terms. In the first part of my essay, I would define the ?other? as a marginal group with refernce to Eastenders. Furthermore. I will explain the ?other? in terms of racial difference, more specifically between blacks and whites, with reference to Stuart Hall?s theories and semiotic analysis of Eastenders. I will also explain the ?other? as different in terms of skin colour, making reference to Bell hooks? ?commodity of difference? and analysis of Barack Obama?s presidential TV debates and interviews. I will also highlight the ?other? as a threat to the western culture with reference to Said?s orientalism theory and analysis of news reports on terrorism and immigrant benefit thieves. Finally, I would brief Dyer?s critique of whiteness to deconstruct white hegemony. The ?other? are marginal groups that are subject to the power, categories and practices of the norm. ...read more.

Some suggest that it was at least in part Obama?s mixed race and his light skin, that allowed him to have the success he had and to be easily consumerable by a broad audience. Through his skin colour he was able to work the ?white supremacist? status to his advantage. This is what Bell hooks calls the ?commodification of difference?. Light ? skinned black people have unfair advantage over dark skinned black people as have more privilege because of the colour of their skin. A light skinned black woman is more likely to be portrayed at the front page of magazines e.g. Glamour, Ok!, Vogue Magazine than a dark-skinned black woman. The acceptance of Barack Obama, Beyonce, Tyra Banks by the American media and public defines the ?other? as dark-skinned black people who are disadvantaged in media representation because of their skin colour that does not conform to the skin colour of white people. Nowadays, more and more people of colour are represented in the media ? news programs, soaps, reality shpws to celebrate the success of black people. Eastenders first all black episode receive a huge amount of viewership. According to Daily Mail (2009) ?BBC?s first ever all black episode of Eastenders watched by 8.4million viewers?. It addressed racism in Britain in 1950s defining the ?other? as black people whose skin colour was different from white people and was therefore treated differently. This also shows the ?commodification of difference? where the representation of people of colour are used as a strategy to gain viewership. Although there has been an increase in the representation of black people but it is often because of the subject of sport. The other is a spectacle for consumable purposes of dominant groups. Black people are portrayed in stereotypical fashion as physical rather than mental beings. The ?other? is a threat to the national culture of the West. The contemporary preoccupation with the ?other? represents a concern for personal identity in a time of fears of ?aliens? perceived as threatening familiar life patterns. ...read more.

The deconstruction of whiteness to contest the form of white priviledge is to conceal inequalities that structure the present and to show that white is ?just? another minority, who can suffer discrimination just like everyone. Most of the discourse of race, ethnicity and identity define the ?other? as people of colour and that white is the norm but the transformation of whiteness by Dyer?s debate shows that colour can be invisible, so it can also be the norm in certain areas e.g. Hip Hop, Sports, areas that are populated by black bodies. And white is the ?other? here. So it isn?t necessarily people of colour i.e. Blacks that are the other, white people can also be the other, since its privilege has been contested by Dyer?s debate. Although, there are critcs on whether the transformation of whiteness can be attainable. Theorietical debates provided by Stuart Hall, Bell Hooks, Edward Said, and texts from Eastenders and newsreports on race and terrorism shows that dominant groups use mass media representation of race to construct the ?other? as different, stigmatising it as ?alien? or a threat to maintain oppression, exploitation and to construct itself as the norm. The stereotypes of the ?other? as deviant and abnormal influences self and social identity. Dyer contests the power of whiteness to show that white is ?just? a minority. The discourse of the ?other? makes us understand racism. The dominant group appoints the ?other?, this is because the ?other? is a minority and the ?norm? is the majority. We should not allow ourselves to be consumed that light-skinned black people are more desirable than dark-skinned black people. Young (2000, p.427) states that ?Our energies should be aimed at the system that constructs and produces us as racialized, gendered, classed and sexualized subjects in such a way that we are constantly placed in a hierarchy and presented to each other as natural enemies, forever in competition with each other?. The ?other? is a fascinating subject, which is used in the regime of representation. Whether we are racist or not the ?other? still catches our attention. ...read more.