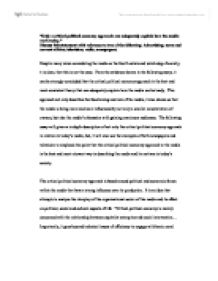 while few others have no voice."7 This characteristic has the potential to maximize the influence of newspapers on their readers and in turn society. But this influence is a far reaching one as "given the large majority of right-wing newspapers, that their collective effect within the media can be very large when they act in unison."8 As there is a majority of right-wing newspapers, it shows not only that they are not being impartial, but are not also providing society with the whole information which it deserves and is reliant on. In contrast, newspapers can also change their social, political and cultural alignments. For example when there is a change in ownership "Changes in ownership can also alter political allegiance. Up until the late 1990's, The Express was a conservative - supporting newspaper, however it shifted toward Labor when Lord Hollick (a labor peer) bought the newspaper."9 The Lord Hollick and The Express example is clear reminder and in many ways a warning of how much power and influence the owners of the mass media can have over not only the media as a whole but our own perception of society. This example furthers the critical political economy that the mass media is used as a form of capitalist enterprise. But also shows how today's media is affecting political, social and cultural aspects of life instead of its traditional role as a watchdog and impartial source of information. ...read more.

Television is clearly the most used media and is increasingly undermining the use and importance of newspapers. In this role hopefully it would not be affected by the capitalist enterprise or political and social alignment of its owners. Unfortunately, there is great evidence to support that this is not the case. Television is dominated by profits and gaining ratings. "The estimated cost of buying a slot in the nation's most popular soap opera, Coronation Street, stands at a staggering �100,000."16 With this sort of money being spent on advertising, we are seeing television greatly sculpted and changed as it replaces its job as a watchdog and provider of information to being dominated by the quest for ratings. In this light, it is clear that television may have lost its own purpose of entertaining and informing and replaced it by its quest for the social, political and cultural domination of public information. In terms of the question, it can be concluded that the critical political economy approach can adequately explain how the media works today. It is shown through the examples of newspapers and television that the media is simply a business, based around consumers. A big business that "has been transformed into one of society's most important institutions, exercising influence in virtually all aspects of social and political life, assuming a central role in the shaping of culture..."17 It is therefore clear that in the world today the best way to adequately explain how the media work today is through the critical political economy approach. ...read more.