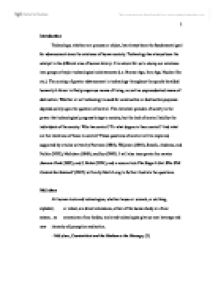 Introduction Technology, whether as a process or object, has always been the fundamental goal for advancement since the existence of human society. Technology has always been the catalyst in the different eras of human history. It is natural for us to clump our existence into groups of major technological achievements (i.e. Bronze Age, Iron Age, Nuclear Era etc.). The coming of greater advancement in technology throughout the epochs heralded humanity's fervor to find prosperous means of living, as well as unprecedented means of destruction. Whether or not technology is used for constructive or destructive purposes depends solely upon the question of control. The elemental paradox of society is the power that technological progress brings to society, but the lack of control held by the individuals of the society. Who has control? To what degree is there control? And what are the intentions of those in control? These questions of control will be explored, supported by articles written by Postman (1992), Wajcman (1991), Resnik, Andrews, and Nelkin (2002), McLuhan (1969), and Joy (2000). I will also incorporate the movies Jurassic Park (1993), and I, Robot (2004), and a news article The Stage Is Set: Who Will Control the Internet? (2005) written by Mark Long to further illustrate the questions. McLuhan All human tools and technologies, whether house or wrench, or clothing, alphabet, or wheel, are direct extensions, either of the human body or of our senses...as extensions of our bodies, tools and technologies give us new leverage and new intensity of perception and action. - McLuhan, Counterblast and the Medium is the Message, (2) ...read more.

Additionally, the degree of control on behalf of the individual being exploited is non-existent. The point of control of this scenario belong to the economic elites; the corporate elites of the capitalist world. Bill Joy The twenty-first century GNR technologies have clear commercial uses and are being developed almost exclusively by corporate enterprises... We are aggressively pursuing the promises of these new technologies within the now un- challenged system of global capitalism and its manifold financial incentives and competitive pressures. -Joy, Why the Future Doesn't Need Us, (Joy 306) The ability to control technology over the recent years has become an issue of importance just as much so as developing them. This is especially critical when advances in genetics, nano-technology, and robotics (GNR) are made. If the GNR technologies are being developed unchecked solely by corporations, then the moral and environmental repercussions of employing the GNR product can be easily overlooked in favor of profit maximization. The danger can be severe if the GNR technology used has the capability to self-duplicate itself at exponential rates. Joy refers to the immense damage GNR replication can accomplish as "gray goo" (306). "Gray goo would surely be a depressing ending... and one that could stem from a simple laboratory accident. Oops" (306). The perils of self-duplicating, genetically modified organisms are very clear and simple to comprehend. This can be done by taking a historical example of the introduction of foreign animals of the West into a domestic ecosystem of Australia. When Australia was colonized by the British, the first settlers brought along with them pets and pests, which thrived because of their efficiency over the native wildlife to hunt and populate. ...read more.

in power, since it is possible for the oppressing government to utilize the internet as a weapon to further subjugate their population. Personal Experience My father was born during the baby boom generation of post-war Korea. During his lifetime he has witnessed great change around him. South Korea during the early 1960's was marked by great poverty, civil unrest, and the military uprising led by President Park Jung Hee. My father always used to tell me about the scarcity of electronic technology during his youth. It was quite normal for an entire neighborhood to share the use of one television set, telephones, and refrigerators, which was considered a luxury. That all changed after South Korea became an economic success, a nation going from being a third world nation, to a developed nation by developing heavy industry and electronic technology. The speed of technological transition has drastically changed the Korean society into a technocratic one. Conversely, most Koreans in my father's generation are completely computer illiterate. My father still occasionally pounds the keyboard time to time when the computer is slow to respond, as well as shouting at the monitor, commanding it to work. He has a very difficult time in being able to control the computer to do what he wants to do. Those unfamiliar with a new piece of technology often find themselves without control. The most astonishing technological advancement brought to the attention of my father is how the Internet and e-mail makes communication between relatives in Korea, who live half way around the world, instant. I'm sure in my father's point of view his concept of the entire planet just got a whole lot smaller. ...read more.