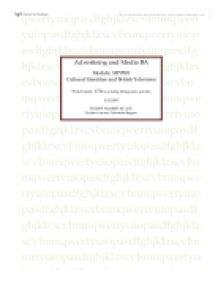 representation of ethnic minorities in eastender

Advertising and Media BA Module: MP0501 Cultural Identities and British Television Word count: 1714 (excluding bibliography and title) 5/5/2009 STUDENT NUMBER: S013351 Student name: Fahmida Begum The representation of ethnic minorities (especially of Black and Asian origin) in the BBC Soap Opera EastEnders This essay will be exploring and critically examining how ethnic minorities are represented in the British soap opera EastEnders' and how accurate their portrayals are and its affectivity on representing reality. 'Ethnic minorities' are those who are the 'minority' in context to the rest of the population in terms of race, culture and religion. Within the UK this includes: Asians, Blacks, and Chinese etc. The essay will begin by giving an outline of the soap opera genre and a brief history of EastEnders'. It then goes into further depth of current and past characters from different ethnic groups and whether this was positive or negative representation. In exploring these issues, the essay endorses the lack of representation within the soap and its effect it has on the audiences understanding of other races through how characters are represented in the soap. Soap Operas are serial dramas set in a domestic setting; they deal with everyday issues and are very character based, the plots often rely on the actions of more than one character. ...read more.

The 'Masood' family are the current (2009) Asians family in Walford whom are a Muslim Pakistani family, with three children, Syed, Tamwar, and Shabnam. The 'Masood' family were introduced as the owners of local post office which later on ended up going bankrupt, the family and are now in joint food business with the long running 'Beale' family called 'Masala Queen'. (Buckingham 1987:90) 'EastEnders does seek to provide 'positive images', of co- operation between different ethnic groups...'. The soap has been now hailed for the more realistic representation and staying away from the corner shop stereotype, Representations of Blacks on the show have/are including: 'Gus Smith' who was a dustbin man, 'Anthony Trueman' the doctor, 'Chelsea Fox' (hair salon receptionist), 'Libby Fox' (smart 'oxford' standard student) Hobson said, 'while other series are often accused of not including enough ethnic characters, EastEnders has integrated good and bad characters, as representation of many cultures, creeds and colour.' (2003:124)The show has tried to represent Black characters from different paths of life. The first ever all black episode was aired in February 2009, '...the show which included references to civil rights leader Martin Luther King and racism showed an increase of over 1million viewers' (Daily Mail website). The episode focused on the Fox and Trueman families, no white characters were featured at all 'in the soaps 23 year history'. ...read more.

Many young ethnic minorities grow up feeling misunderstood due to the continuous repetition of the same old stereotype. In conclusion to this essay, analysis of EastEnders has taken place through studying current and past characters and the revelation of EastEnders representing London currently of 40years back. We should take into account and think about is how can EastEnders try to include and represent the entire ethnic minorities/race through a few characters? ethnic minorities come from different countries and cultures but they're still human, not everyone's the same, everyone has their own individual traits. Perhaps, introducing more ethnic minority characters into EastEnders and giving them more stronger storylines will help conquer the lack of representation of the real ethnography of London it currently struggles to have. Through this essay we come to understand that British television (especially soaps) still find it difficult to represent England as a multicultural society. With the hundreds of complaints received from the recent all-Black episode, it has proven many audiences still struggle to accept or even understand other cultures and ethnic groups. If this was an all white episode, which has been many, it wouldn't be controversial at all. The audiences are still being shocked due to the lack of such episodes on our screens, with more episodes featuring ethnic minorities; audience will be more accepting and not feel alienated. ...read more.