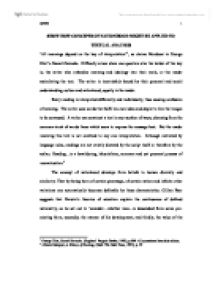 Show how concepts of nationhood might be applied to textual analysis

SHOW HOW CONCEPTS OF NATIONHOOD MIGHT BE APPLIED TO TEXTUAL ANALYSIS 'All meanings depend on the key of interpretation'1, so claims Mordecai in George Eliot's Daniel Deronda. Difficulty arises when one question who the holder of the key is; the writer who embodies meaning and ideology into their work, or the reader assimilating the text. The writer is inextricably bound by their personal and social understanding, culture and nationhood, equally is the reader. Every reading is interpreted differently and individually, thus causing confusion of meaning. The writer uses words that fulfil his own ideas and depict to him the images to be conveyed. A writer can construct a text in any number of ways, choosing from the common stock of words those which seem to express the message best. But the reader receiving this text is not confined to any one interpretation. Although restricted by language rules, readings are not strictly dictated by the script itself or therefore by the author. Reading...is a bewildering, labyrinthine, common and yet personal process of reconstruction.2 The concept of nationhood develops from beliefs in human diversity and similarity. That by being born of certain parentage, of certain nation and infinite other variations one automatically becomes definable by these characteristics. Gillian Beer suggests that Darwin's theories of selection explain the continuance of defined nationality, as he set out to 'consider...whether man...is descended from some pre-existing form; secondly, the manner of his development; and thirdly, ...read more.

Eliot did not wish to encourage integration or even muting of the cultures; through her novel she desired to 'rouse the imagination of men and women to a vision of human claims in those races of their fellow-men who most differ from them in customs and beliefs'.8 Eliot shows us the importance of the maintenance of the Jewish lines through the character of Mirah, who insists on the necessity of maintaining her Jewish heritage: 'I will always be a Jewess...I will always cling to my people' (p.362). Eliot is warning against the conversion of Jews to Christianity or assimilate them to Christian culture: despite the deep spiritual linkage between the two religions, they represent distinctive, equal and enduring ways to redemption.9 Eliot's presentation of Daniel as the perfect English gentleman suggests that although Jewish by blood, his culture and the environmental factors that he was raised are equally valuable. Beer proposes that the Jewish and the English are not to be thought of 'dualistic terms'; what Eliot is exploring in the novel are the similarities of the cultures, the common sources. Race, nationhood, ethnicity and culture present certain problems in their definition, especially when relating to the Jewish nation. Judaism is a nationality, but yet also a religion, but no other faith has such status. Their loss of a homeland brings into question the idea of race and nationhood, as it is quite indefinable. ...read more.

The matrilineal nature of Judaism gives the female simultaneously elevation and oppression. She is the bearer of the future generations, the definer of the culture, but is the first to become expelled from the society for adverse behaviour. Daniel's mother rejects her nationhood in order to attain that which would be disallowed; fame as a singer. She rejected more than just motherhood and family, she had to detach and 'bury' a part of her, the part that Daniel regards the highest - her faith and status as a Jew. His mother attempts to break the chain, but it is within him; Daniel is enriched by the multiple past, both genetic and cultural. 'The past here is not one or two generations in a local community, but of transformation from the primary forms of life, and problems of transmission.'12 Literature must address and mediate upon questions of race class and gender, the most complex and urgent questions of personal identity and citizenship.13 The longevity of text, its wide-reaching format, the infinitely debatable nature of meaning that can be derived from a text makes it the perfect medium in which the 'vital consideration of 'who' we are can be reassessed, problematised and perhaps even transformed'.14 Writers may reproduce their understanding, beliefs and experience, offering heightened and stylized versions of themselves and ourselves which we may consciously internalise or actively resist. Daniel Deronda not only examines and explores Jewish culture; it also examines the ideological fabrication of 'Britishness', and inevitably leads to questioning our own nationhood. ...read more.