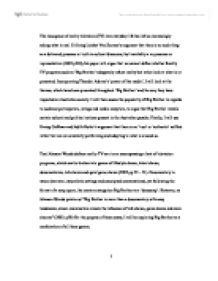 The insurgence of reality television (TV) into everyday life has left us increasingly asking what is real.

The insurgence of reality television (TV) into everyday life has left us increasingly asking what is real. Utilizing Leisbet Van Zoonen's argument that there is no such thing as a delivered presence or truth in cultural discourse, but inevitably a re-presence or representation (1995 p319),this paper will argue that we cannot define whether Reality TV programs such as 'Big Brother' adequately reflect reality but rather look at what is re-presented. Incorporating Theodor Adorno's 'power of the media', I will look at the themes, which have been presented throughout 'Big Brother' and the way they have impacted on Australian society. I will then assess the popularity of Big Brother in regards to audience participation, ratings and media reception, to argue that Big Brother reveals certain cultural and political notions present in the Australian psyche. Finally, I will use Erving Goffman and Judith Butler's argument that there is no 'true' or 'authentic' self but rather that we are constantly performing and adapting to what is around us. Toni Johnson Woods defines reality TV as a term encompassing a host of television programs, which can be broken into genres of lifestyle shows, talent shows, documentaries, talk shows and quiz/ game shows (2002 pp 53 - 54). Documentary in nature (narrator, naturalistic settings and unscripted conversations), yet following the format of a soap opera, the creators categorise Big Brother as a 'docusoap'. ...read more.

Neighbour further suggests that the reason Big Brother has so much appeal is because it represents the aspirations of many Australians - fame and riches for doing nothing. The conclusions that can be drawn from the immense popularity of Big Brother and Australia's recent embrace of reality programs cannot be underestimated. As Kubey argues "Television has become our species preferred and most powerful means of mass communication" (1990: p xi) By analysing the popularity of the show, the audience participation and media reception of both the program and the housemates, it is evident that Big Brother has achieved enormous cultural and political work. As Leisbet Van Zoonen argues representation within the media is not only a literal reflection of women's and men's lives and identities, but also in modes of thinking, sets of norms, values and current discourse. (1995: pp 311 - 327). The fact that, that 2.8 million viewers watched the original season finale and Big Brother topped the 16 - 39 demographic for nine weeks (2003 p6) "provides a fascinating and often disturbing barometer of community attitudes" (Spencer 2002 p1). Each season popular opinion is drawn to the "typecast Australian". For three successive seasons, "12 supposed stereotypes entered the house" (Tranter 2003 p2) and every time the 'average' Australian won. Ben, Peter and Reggie - the winners of each season - are all working class heterosexuals with broad Australian accents. ...read more.

and by casting the candidates and setting tasks for the housemates to complete, the production team is able to manipulate the show. However as, Van Loonen argues "there is no such thing as a delivered presence or truth and "representations contain only a fraction of what could have been presented, thus all are selective abstractions" (McQueen 1998 p140). In reality we focus on some things rather than others, order them in narrative and rank them importance (Spencer 2002 p1). Within everyday life we are constantly constructing and reconstructing our identities and roles by the way we relate to others. As Judith Butler argues humans do not express some authentic inner "core", but rather are the dramatic effect of performances, which shifts and changes in different contexts and at different times (1990 p25). This is supported by Erving Goffman, whom views interaction as a 'performance' shaped by environment and audience, constructed to provide others with "impressions" that are constant with the desired goals of the actor. (1959:17) Thus, I conclude that although society desires "the authentic", the constantly changing world means that defining something or someone as 'authentic' is impossible. Reality TV has come to play a large role in defining modern society. Whether it is a 'boring show nothing' (Wendy Harmer 2DayFM) or a program of 'quality entertainment' (Beth Spencer) the effects, achievements and popularity of programs such as Big Brother gives great insight into the culture of our nation. ...read more.