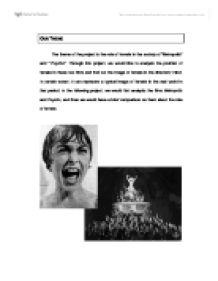 The theme of the project is the role of female in the society of &quot;Metropolis&quot; and &quot; Psycho&quot;.

OUR THEME The theme of the project is the role of female in the society of "Metropolis" and " Psycho". Through this project, we would like to analysis the position of female in these two films and find out the image of female in the directors' mind. In certain extent, it can represent a typical image of female in the real world in that period. In the following project, we would first analysis the films Metropolis and Psycho, and then we would have a brief comparison on them about the role of female. METROPOLIS Background Metropolis was made by Fritz Lang in 1926, which is one of the most successful films of Fritz Lang. It is the first science-fiction film with the first cinema feminist cyborg. Metropolis has great influence on film industry and is one of the most favorable films in the world. Metropolis was created and introduced after the Industrial Revolution in Europe, with only around 8 years close to the 1917's Russian Revolution. Therefore, many aspects of the film were affected by the Industrial Revolution greatly. For examples, the targeted, depicted place and the story background is an imagined city in 2026, one hundred years later when the film was made. Fritz Lang was delighted by the architecture of Manhattan in America at that time. And this modern and fascinating architecture is the consequences of the Industrial Revolution which leads to modern and wealthy. ...read more.

The oppression of feminism Fritz Lang seems to agree the liberation of feminism but actually he strongly disagrees that and thinks that feminism should be oppressed. He points out that women can have but should not have the ability to control. The destructive of the cyborg Maria imply that feminism may have negative effect to the society. Thus, it should be oppressed. This strongly shows that women should not have too much power. Otherwise, it would adversely affect the society. We can prove this by the scene of robot Maria irrationally agitating the emotion of the workers and leading to the flooding and even the destruction of the city. And, these problems can only solved by men in last. The deprecation of female The filmmakers designed that the robot has the identity of female. It shows that the cyborg and the female are indifferent in the men's eyes and the cyborg can take over the role of the female. This greatly deprecates the female and imply that female is only an object without any knowledge, self-thinking and rational mind. It can only be controlled by men and takes action of the men's orders. The expectation of male on female In the film, Maria is turned into a cyborg. A cyborg is asexual and a neuter and do not need to be "born" by female. In the synthesis of the cyborg, the men can create a new "life" by themselves. ...read more.

There is a screen that Maria plays an erotic dance in public and the director focuses on the male gaze towards Maria and it shows that men's wants on women. In psycho, the shower screen of Marion shows the idea of voyeurism. This shot is filmed in the way that Norman spies Maria through a hole and then Marion takes the shower. And the director treats this screen as a kind of recreation by showing the female's body. Differences The degree of objection towards the feminism is different in two films. The idea is that men should dominate the society but women can still act as a preliminary role. However, it is greatly disagreed with the feminism and all the fates of women are very bad and they are almost killed by men. To the theme of movie, Metropolis and Psycho have different direction. Metropolis is rather theoretical and the director expresses many components in the file. The main expressed idea is the capitalism, Industrialism and also feminism. The expressing way is rather direct and the idea on the status of females is also more obvious. For Psycho, the genre is a horror film and the way of expression is story-telling. The director uses a rather direct way to reflect the status of female. In conclusion, the views on the status of females are rather obvious in Metropolis and passive in Psycho. Huma012 T7 Group Report The role of female in Metropolis and Psycho Group members: Leung Hoi Ying, Genie Wu Ka Yan Dorothy ...read more.