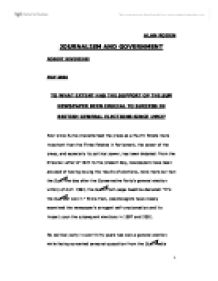 To what extent has the support of the Sun newspaper been crutial to success in British general elections since 1992?

ALAN RODEN JOURNALISM AND GOVERNMENT ROBERT BEVERIDGE MAY 2004 TO WHAT EXTENT HAS THE SUPPORT OF THE SUN NEWSPAPER BEEN CRUCIAL TO SUCCESS IN BRITISH GENERAL ELECTIONS SINCE 1992? Ever since Burke characterised the press as a Fourth Estate more important than the Three Estates in Parliament, the power of the press, and especially its political power, has been debated. From the Zinoviev Letter of 1924 to the present day, newspapers have been accused of having swung the results of elections, none more so than the Sun. The day after the Conservative Party's general election victory of April 1992, the Sun's front-page headline declared: "It's the Sun wot won it." Since then, psephologists have closely examined the newspaper's arrogant self-proclamation and its impact upon the subsequent elections in 1997 and 2001. No political party in over thirty years has won a general election while facing concerted personal opposition from the Sun. Media tycoon Rupert Murdoch, who now owns 175 newspapers world-wide, acquired the tabloid title in 1969. The paper backed Labour in the 1970 general election, but has not backed a loser since then. Politicians of all persuasions court the Sun because it has the largest circulation and readership in Britain. It is also read, politicians believe, by millions of people at election time who do not normally follow politics very closely. It was in 1992 that the Sun ran its most devastating series of attacks on a political leader - Labour's Neil Kinnock -, which culminated in the newspaper's infamous self-aggrandizement the morning after the election. The paper lost no opportunity to pour scorn on Kinnock's credibility and it waged a sustained campaign against him. On the eve of the poll, a feature entitled "Nightmare on Kinnock Street" topped eight consecutive pages and on election day itself, the front-page splash placed Kinnock's head inside a light bulb alongside the headline: "If Kinnock wins today will the last person to leave Britain please turn out the lights." ...read more.

Judith Orr therefore concluded: "The Daily Mirror proved to be twice as effective in influencing its readers' vote as the Tory tabloids and so, even though its readership is half that of comparable Tory papers, the net result was about even."10 Nevertheless, many of the changes made by the Labour Party after the 1992 election were specifically designed to give the Sun less ammunition. Shortly before the 1997 election, Labour persuaded the paper not only to spike its guns, but also to turn them on its Tory rivals. The decision to support Blair was remarkable given the way the newspaper had mercilessly attacked Kinnock only five years previously. On March 18, 1997, the Sun published a front-page article headlined "The Sun Backs Blair," although the switch had been apparent for many months. The Labour leader was the "breath of fresh air" that Britain needed, the editorial said. However, the Conservatives played down the importance of the paper's endorsement and John Major went on breakfast TV to say that it didn't matter: "I don't think that up and down the country, in the Dog and Duck, or at Number 10 Acacia Avenue, they are going to say 'Gosh, the Sun's backing Labour, and, therefore, I must change my mind."11 Overall, during the 1997 campaign more than twice as many people were reading a newspaper that backed Labour as were reading one that supported the Conservatives. For those commentators, such as Linton, who believed that the Tories traditional advantage in terms of press partisanship provided them with an unfair advantage at election time, the outcome of the 1997 election appears to be a clear vindication of their claims. The press realignment helped to reinforce the dynamic image of Blair and his party at the expense of their opponents. This advantage was augmented by the agenda-setting function of the media, which focused on the very issues - European integration, and sleaze, which ultimately did so much to expose Conservative divisions. ...read more.

The Sun proudly quoted the paper's reference to political editor Trevor Kavanagh as the most powerful political journalist in Britain. All the press had been following the Sun's lead with thousands more words, the paper's editorial claimed. The Sun was probably right to play on its insider knowledge at this election, as no newspaper could have realistically altered the outcome of Labour's second landslide. Thus it was the most subdued press coverage of an election for many years, only truly involved when Deputy Prime Minister John Prescott punched a protester, and the press exulted neither at the result nor its part in the outcome. With readership in decline and apathy on the increase, it no longer seemed to matter so much what the tabloids wrote. Their circulations, with the exception of the Daily Mail, were also falling - the Sun by eight percent to 3,288,000 in May 2001.20 Harrop and Scammell commented: "Ironically, Labour's triumph in the press occurred at a time when the direct value of the prize had fallen."21 A clear answer to the question of the Sun's influence will only emerge after a close election in which the government faces a revived opposition. Then it will be possible to see which papers have been flying a flag of convenience throughout Blair's premiership. Tory leader Michael Howard recently addressed the editors and executives of Rupert Murdoch's News Corporation, something Blair did in 1995. The meeting came after Murdoch hinted the Sun might back Howard at the next election. Even if was not the Sun wot won it in previous elections, it is understandable that a party leader would rather have the paper on its side. The Sun has immense negative power. The paper cannot get people elected and it did not win any election outright, but it can and has done immense damage by running sustained and brilliantly entertaining knocking campaigns designed to destroy political reputations. If the press matters at all at election time, the Sun matters most. ...read more.